I've put a new PDF file on my website containing instructions for extracting color from wood chips and for dyeing with the extracted color.

Go to the website, click on Extra Features, and you'll see a link to the document. Have fun!

Yesterday, I wound off skeins of tencel for weft yarns for the upcoming Wood Series scarves. As they were mordanting, I put out all the cones of small quantities of wood-dyed yarn from past projects to admire and to sort into the order in which I'll use them. 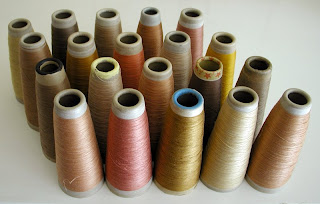 What I'm contemplating is to wind 4 ends at a time on the warping wheel. For each "round" I'll swap out one color and replace it with the next in the lineup. That way the colors will be evenly mixed. Because it'll be a 2x2 cross, I'll just thread whichever one of each pair I pick up first, so the color order will be further randomized.

In addition to these cones, I found two larger cones, each of which might have enough yardage to be used for weft. 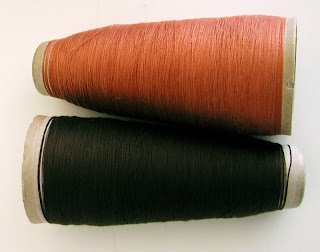 I won't know until the yarns that are now in the mordant bath are dyed, dried, and wound onto cones. At that point, I can compare the weight of yarn + cone and decide if these will do. If so, great; if not, I can easily measure, mordant, and dye more.

I'm planning to sett the two different warp yarns differently. The wool stripes (a 2/28 merino from Silk City) will be 2 ends per dent in a 12-dent reed. The stripes of mixed tencel and silk will be sett 3 ends per dent. Picks per inch will have to be somewhere in between. I don't want too much weft in the wool stripes, such that it prevents the wool from shrinking as much as I want; I may use a broken twill or a 5-end satin in the wool stripes to ensure that there are enough floats to let the wool have room to move. The tencel/silk stripes will be plain weave, also with enough room to move so they don't inhibit the wool stripes' behavior.

I'm looking forward to seeing the results! Thank you very much for posting the pdf with the dye instructions. I'd like to try this technique.

Have you had any experience with dyeing bamboo yarn this way?