And On to the Next Thing

...which will be more towels, but this time in a style more similar to my usual work. I've designed (or rather redesigned) an interleaved threading for a towel warp. The threading is quite similar to the one I used for the warp-painted scarves I posted about in October and November of last year. It needed some minor tweaks to make it appropriate for towels at a sett nearly half the density of the scarves. The scarves were woven on a warp of 60/2 silk sett at 72 epi, the towels will be 24/2 mercerized cotton sett at 48 epi. That meant I needed to be more vigilant about floats.

So after some time wrestling with the draft, I've got what I think I want. It assumes an interleaved warp dyed in two hues, teal and blue violet, both the same or similar value. In this example, the weft is a light-to-medium blue. The yarns are yet to be dyed (although they're scoured and waiting patiently in a bucket in the studio) so until the colors are in the realm of the real, it's all hypothetical.

This is a portion of the draft, showing the interleaved threading, the tie-up, and treadling: 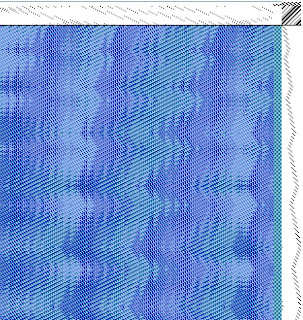 When I change the weaving software to "cloth simulation" mode, the draft produces this: 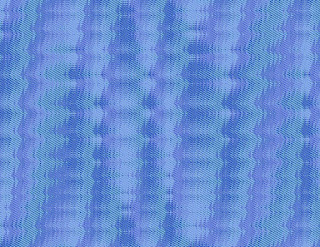 I've got a range of other treadlings, each of which gives the cloth a different look, for example: 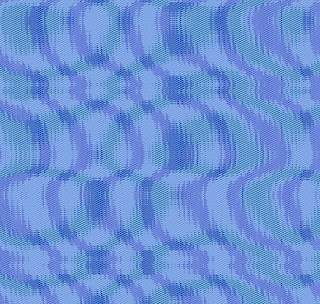 Tomorrow (and probably the next day) I will play in the dyepots. Pictures to follow as things approach the realm of the real.
Posted by Sandra Rude at 6:56 PM

Cool! Especially the last one. :)

these will be the Ritz, or should i say the Savoy, of dishtowels.