They may be woven, but there's still not much to show, because #12 is identical to #9 with a slightly different weft color, and the designs in #13 and #14 are virtually invisible while under tension, but will magically appear when wet finished. These last two use a pale blue-violet weft, which is so close in value to the warp it just vanishes.

I can show you the drafts, though, and photos later, after the warp is off the loom and the towels are finished. This is #13, similar to an earlier towel but this one looks more like a lineup of winged bugs than like fish scales (dare I say the "m" word? moth?): 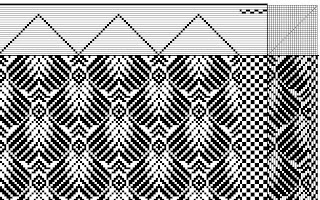 These guys were woven as a border, not an all-over design.

And #14, with allover medallions on a point twill ground. The texture will be really obvious once the cloth is finished, because of the 2x2 and 3x3 basket weave areas in the medallion. 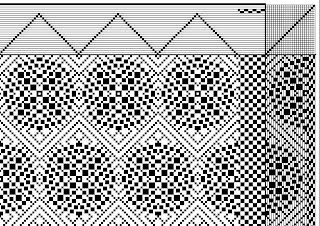