Tying On in the Middle of a Warp

Well, after trying Alice's method for tying onto the cloth apron after cutting off part of the warp, I've gotta say it works a charm! Thanks, Alice! 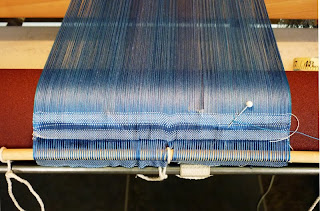 My knots left a lump in the middle, but since the first scarf starts out with 6 inches unwoven for fringe, I suspect this difference in tension will work itself out pretty quickly. I was a bit nervous about putting tension on the yarns that are woven in (and glued) before and after the dowel, but after all as soon as the yarn gets onto the sandpaper beam, it doesn't put much tension on the dowel, just on the threads. I did breathe a sigh of relief when the first woven cloth became firmly held by the sandpaper beam, though.

Next time, I'm sure it'll be much easier and much less nerve-wracking.

(See the previous post for a link to Alice's description of the process.)
Posted by Sandra Rude at 7:12 PM