It's been since forever that I put a warp on the little (1-meter-width) 8-shaft Glimakra, so I'm feeling a bit fumble-thumbs during the exercise.

I posted about the warp here; I've finally gotten around to actually beaming it. Given the discussion on WeaveTech about using lease sticks during beaming, I decided to give it a go and see if it helped get good tension on the wildly differing amount of elasticity in this mixed warp.

The loom has been modified to have two raddles. One is bolted to the loom frame just above the back beam. The second consists of a row of nails in the rearmost rail of the castle.

I spread the warp on a metal rod that gets lashed to the wooden apron rod. I distribute the warp in the lower raddle, then tie a raddle cap on to hold the warp ends in their respective slots. The warp then goes up through the lease sticks and behind and over the upper raddle (no cap needed), and down into my hand. 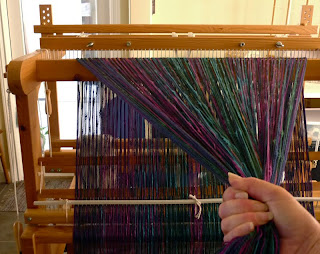 Here, I'm standing a couple of yards behind the loom, camera in left hand, so you can see the path of the warp. The important thing is that the warp threads are parallel for almost 3 feet, which helps them wind on evenly. During actual beaming, I stand right behind the loom, holding the warp in my right hand and winding with my left.

When the end of the warp approaches the upper raddle, I lower it (and the lease sticks) into position between the back beam and the shafts. 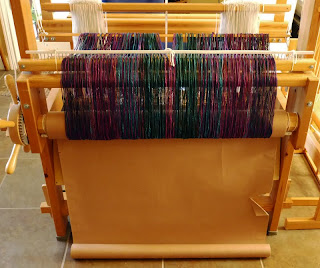 I use a product called roof sheathing as warp separator. It takes up way less room than warp sticks, and isn't nearly as noisy as it's released onto the floor during weaving.

(My apologies - the first 2 photos were taken with the camera in some strange mode that put the white balance way off - much too yellow - and even Photoshop couldn't adjust the color. The last photo is much more accurate........)

At that point, threading begins. 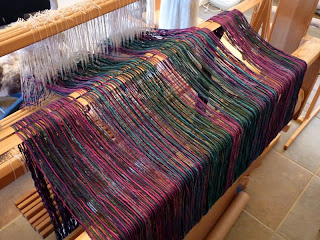 Here, I've threaded about 2/3 of the warp, working from the center out. (This is a countermarche loom with cords running down the middle to the lamms, so I have to thread from the center out to avoid counting out every heddle on every shaft, which I'm much too lazy to do.)

My conclusion on lease sticks during beaming? For this mixed warp, it was helpful. Many of the yarns are actually better suited to knitting, but since this is a stash-reduction effort, anything in the approximate grist (sett will be 16 epi) and approximate colorway for the warp was fair game. The degree of elasticity varied wildly among the various yarns, and the lease sticks helped account for that. I ended up with some of the more elastic yarns almost 4 inches longer at the front of the warp than the less elastic yarns. I figure a little waste is better than crappy tension...
Posted by Sandra Rude at 12:24 PM

What a pretty warp! I would make excuses to walk past that warp ten times a day if it were mine. Not to weave it, just to look at it!

even if it had crappy tension it would still be oh pretty colors!