We have power! And heddles going up and down! 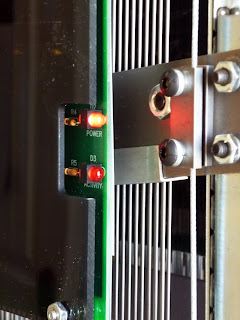 The upper LED lights when power is on; the lower one lights when the module receives data from the computer.

I feel really good about the progress we've made. After all, the loom only arrived on Monday afternoon!

We spent much of the afternoon doing trouble-shooting and debugging. There are a few adjustments that have to be made to ensure the knives are at the right level when they start to move, otherwise the hooks at the back of the module don't catch on the knife.

A few hooks don't seem to be behaving themselves - a hard-to-diagnose situation where on one module, some of the even numbered hooks don't work when they should rise, but are happy when they should sink (this is a countermarche-action loom - when a shed opens, some threads rise and others sink).

DH also installed the computer, and mounted the flat-panel monitor on the top front crossbar, so I don't have to twist my back to see what's happening on the JacqPoint display.
The computer is at the back of the loom - it'll probably live on top of the jacquard control box. 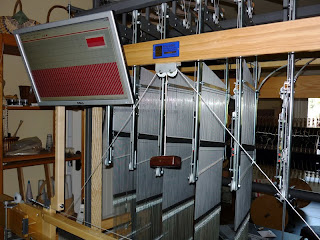 Plus, we needed to do more heavy lifting. I apparently misjudged the clearances between the worktable and the new loom, and between the new and old looms. It was nigh unto impossible to squeeze between, and I'd rather have several access paths available. So we moved the white worktable back farther toward the corner so it's possible to fit between the table and the jacquard, and rotated the 24-shaft loom so it will be possible to walk between it and the jacquard on one side, and between it and the wall on the other side. 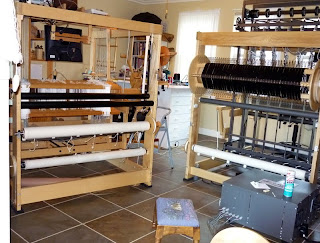 And that's it for today. I'll be away for a couple of days, leaving DH to communicate further with AVL about the remaining issues.

If you're anywhere in the greater Los Angeles area this weekend, and need a really mouthwatering fiber fix, check out the Designing Weavers annual show and sale (see here for details). Fiberholics, unite!
Posted by Sandra Rude at 5:10 PM

fascinating to see the modules set up
didn't imagine they'd go sideways. they are aren't they?
what a learning experience you're providing!!

Hope you have a great show this weekend!