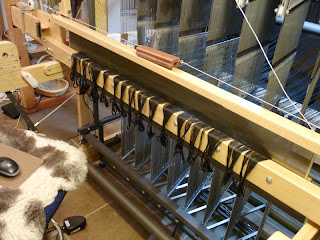 The threading file and the sleying file were indeed very helpful. During threading, it's a good idea to see clearly which heddle is next in sequence. And during sleying, lifting the number of threads that go in each dent is great; no more crossed threads!

There was a moment of panic when I saw that the warp (centered on the warp beam) couldn't make a straight line to the (centered) reed without a sideways bend at the heddles. Not a big bend, but enough to cause concern. Seems the jacquard mechanism isn't quite as centered in its frame as the beam and reed are in theirs. I've been reassured that it won't matter.

Tomorrow, I'll route the apron where it's supposed to go, lash on, and weave a test file or two.
Posted by Sandra Rude at 6:32 PM

Yay!! The first weaving is imminent!

That must feel so exhilarating!

When you ordered this loom, did you check to see if a side-pull fly shuttle option was available? When I had a double-box fs on a previous AVL loom, I asked for a side pull. AVL doesn't seem to publicize that it has this option, but you can get it (sometimes--don't know about your loom) if you ask. I've tried both, and the center pull seemed much harder on my aging shoulders.

Good idea, Ruth! I'm having trouble pulling the cord sharply enough to get the shuttle all the way across the warp. On the 24-shaft loom, it was as easy to weave wide as narrow, in terms of how much effort it takes to throw the shuttle. This puppy ain't fun.