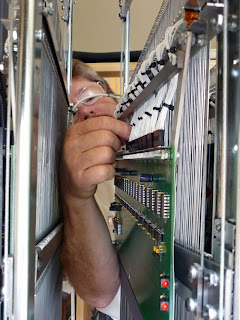 This is DH unplugging groups of solenoid cables prior to replacing the green driver board. Not that it was a bad board. However, it (and 1 other) were at a different revision level than the 6 other boards, so we felt that we'd rather have all the boards at the same level. Makes it easier to describe and analyze problems. "Is that a board with the old capacitors, or the new ones?"

Over the next week, we'll be making a few other tweaks. In the meantime, I'm winding the next warp. This one will be black mercerized cotton again, but 20/2 sett at 60 epi. Until all the tweaks are done, I can't tie the new warp onto the front apron; some things are best done with no warp or at the very least an untensioned warp on the loom. So I'll finish beaming, then tie the new warp to the old one, pull through the heddles, and sley the reed. I won't get any further than that until all the fixes are in.

At least, this warp will be only 16 inches wide; the last warp was 40 inches, which meant it was nearly impossible to reach the boards in the middle of the eight to do any modifications/fixes/adjustments.
Posted by Sandra Rude at 6:02 PM

did his hand tremble unplugging the solenoids?
i went into my solenoid box out of curiosity and almost fainted.

No, he's an electrical engineer and computer scientist. Engineers' hands don't tremble (especially male engineers, who even if they did wouldn't admit to it)! Actually, he's having so much fun tinkering with this loom, it might be his, not mine.