Continuing the practice begun by Meg in Nelson, NZ, a few years ago, here's a look at what's going on in my studio.  I must confess, both looms are undressed (horrors!), but I see that as being full of wonderful possibilities rather than a negative.

The current warp was cut off the jacquard loom in late November. Before taking scissors in hand, I wove a dowel into a plain weave shed and reinforced it with copious quantities of Fray Block. All that's needed is to tie the dowel onto the rod at the "front" of the cloth apron, and the loom will be ready to rumble. I'm not sure exactly how much of the warp is left, but it'll be enough for several weavings. 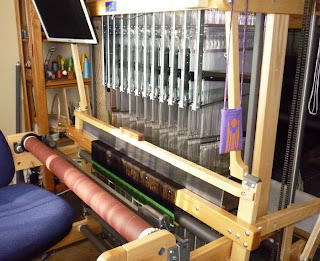 I'd better get a move on, too, because I have a commission to weave the wedding portrait of parents of a couple who visited during Open Studios. I need to choose between two photos, one taken out-of-doors and another taken inside the church. The choice will depend on how much contrast I can coax out of the scanned images - the more contrast, the more successful the woven portrait.

The dobby loom is empty, too. Part of the most recent warp was cut off in November, so I could fringe some of the scarves for the last show of the season. I wove off the last scarf on the warp just before Christmas. 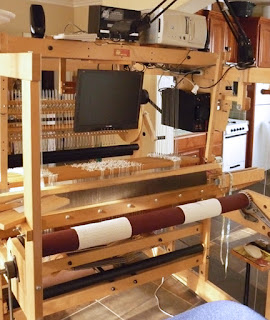 What project will come next? Will it be satin and crepe stripes, using this gorgeous skein of variegated browns and greys on 30/2 Tencel from Just Our Yarn plus 60/2 silk in solid dark brown? 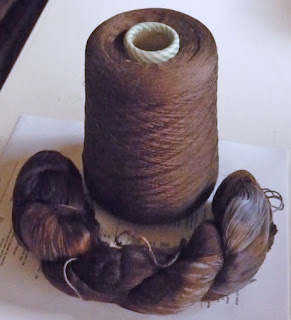 Or will it be seersucker stripes using up several cones of tencel and silk dyed with wood dyes, then overdyed with blues and browns, plus a cone of copper-colored Jump (the rayon-elite stretchy yarn from Silk City)? 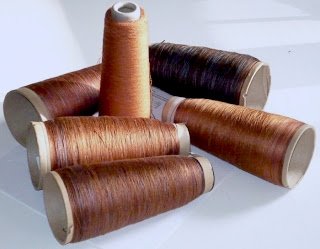 The suspense is part of the fun!
Posted by Sandra Rude at 4:34 PM

Undressed looms are far more welcome that one that's had the same warp for, goodness me, 3 years! I love the colors of both of your proposed warps very much so I won't shout from the sideline but look forward to you updating us.

gorgeous colors!
those looms won't be cold for long .

Me? I'd pick the tencel - I LOVE those colors! I'll check back to see which you choose.