I've hit the boredom threshold with these towels. What can I do to spice things up? Well, I can mix up some blocks and some stripes within one towel. On the left, I've woven a border of blocks, then begun some stripes. A ho-hum time later, on the right, I've finished the stripes, woven the ending border of blocks, and the hem: 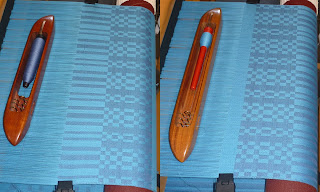 I think I have time for one more towel today, then I'll cut off 10 towels for hemming and finishing, and save the remaining 5 towels' worth of warp for later, after the show this weekend.

Even Tim is looking bored. To be fair, it was nap time. 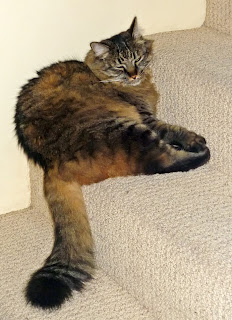 Does that look to you like a comfortable napping pose? Nope, me either. His spine, however, bends in ways that mine would never dream of trying, and this is in fact his favorite napping place and posture. Either like this, or spread out so he completely blocks the stair. He's an awfully big lump to step over, especially now that he's outfitted with the full winter regalia, complete with raccoon tail. It's been cold here (down in the 20s [F] at night) but Tim never feels it. He even has fur growing between his toes, so his paws don't get cold. Gracie, on the other hand, says "Wake me in April, when it's sunny and warm again." Her little paws are always cold when I pick her up, poor thing. 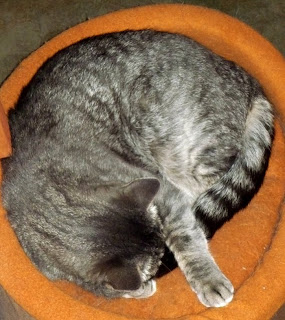