One of the nice things about being a dyer as well as a weaver is that if the yarn you buy isn't quite the color that you wanted (but it's a dyeable fiber), you can always nudge it in the right direction.

As an example, I bought a couple of small cones of a light, mild green 20/2 mercerized cotton made by UKI. If you've ever seen an UKI color card, you know they offer a lot of colors. Not a lot of greens in the value range I want, however, but in any case I bought some and tried it out in several jacquard weavings. It turns out to be "okay" in some images, but "not at all okay" in others. It's got too much grey-blue to it to be effective for a foliage green. So as an experiment, I wound off two 1000-yard skeins. One got overdyed in a strong bath of lemon yellow Procion MX, the other in a strong bath of golden yellow. The results reassure me that the yarn won't go to waste - it can be turned into more saturated colors I'm likely to use a lot of. 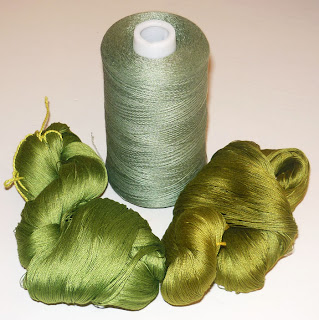 Along the same lines, I have a project in mind for the jacquard loom that will need very saturated red, fuchsia, and orange yarns. Since I was already playing in the dyepots, I wound off two 1000-yard skeins of the sweet, bubble-gum pink rayon I just acquired (the cone on the right in the picture below). One went into a fuchsia dyepot, the other into an orange dyepot. The resulting skeins will work perfectly with the red rayon (the cone on the left below). 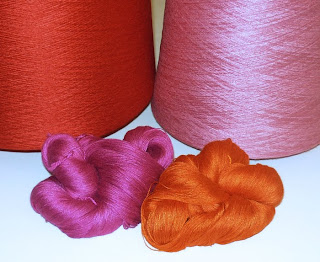 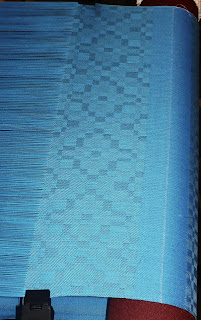 This one uses all the possible flavors of 5-end satin. Click the image to display the full-size version and you can see the variations at the far end of the cloth, where the flash doesn't wash out the colors so much.
Posted by Sandra Rude at 6:26 PM

tweaking yarn colors is a lot of fun.your skeins came out really great, esp. the green ones. i find green such a demanding color!

I think this towel is my favorite! Dye days are always interesting.

Good work, Sandra! I love the slight variegation in the overdyed yarns, will be luscious to weave with!