...finally ended, after some 8 months of weaving.

I wove one more vineyard-related piece, based on a photo taken early last Spring at a local vineyard, where the new "berries" (grapes are technically berries, and that's what they're called by the growers) were just beginning to sprout: 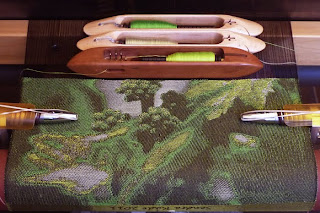 There was still some warp left, so I wove some samples for an image that I want to work with but don't have quite the right colors for - it's time to get the dyepots out - as well as another project I'm contemplating: a run of scarves with text as the design element: 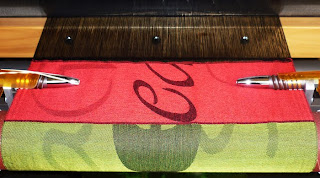 The yellow-green sample is 5-end satin. Using a 20/2 cotton weft in this structure means the weft doesn't pack in as much as it should, so the weft should be finer and the aspect ratio will still need some tweaking. Also, the 5-end satin doesn't give as much contrast between the variations as I would like.

The red sample is 7-end satin, which with a 20/2 weft packs in better, but my sample doesn't use appropriate variations to give me legible text with enough contrast. I might try setting the next warp at 48 epi, and use 30/2 tencel for weft with a 7-end or 8-end satin. Another possibility is a very fine wool, which could be woven at a very open sett, thus creating a wider cloth for shawls...

This is the state of the loom right now: 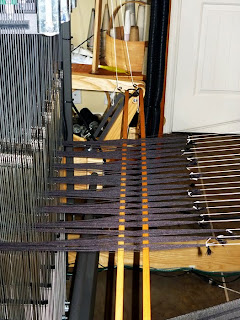 The lease sticks have been inserted into plainweave sheds behind the heddles. After releasing tension on the warp beam, unfastening the apron cords and cutting off the knots at the back of the warp, I'll be ready to cut off the warp in front of the reed. Then the task will be to do the mending and wet finishing and hemming and/or mounting on canvas stretchers. There are a lot of pieces rolled up on the cloth storage beam, waiting to be dealt with, before I can start winding a new warp (whatever it turns out to be).
Posted by Sandra Rude at 1:53 PM

Wow! What a great picture of the vineyard.

i think that after such hard work we could do with some elfin help to do the boring work.
hemming ugh!!!