One Step Forward, Two Steps Back

Yesterday, I tied 120 knots. For the first 48 of them (one section of the sectional beam) everything went quickly. When I got to the second 48, things started to slow down as some of the new warp ends wouldn't hold a knot without breaking. I mean, look at it cross-eyed and it breaks! However, because I'm stubborn (have I mentioned that before?) I just kept going and finished the first loom module (those pesky 120 threads).

As I thought about it, I realized that when I was 4 sections away from completing beaming the warp, one of the cones of black 20/2 mercerized cotton ran out, and I swapped in a different cone (I was warping with 4 threads at once). I should have been suspicious when I saw the cone was cardboard and not plastic, like the new packages from UKI always are; after all, it had an UKI label in it - should be good, right? I should have done a breakage test to see if the yarn was sound. Shoulda, shoulda, didn't.

Four sections had 1 end in 4 of the bad yarn. No way that I could envision a clean and easy and painless fix for replacing 1 out of every 4 ends. I considered hanging them off the back of the loom on a weighted mailing tube. I've done that before, but for short warps, not 15 yards.

Last night, my brain worked overtime in background mode trying to figure out the most efficient (and least exasperating) way to solve the problem. I remember having the strangest dreams all night!

Anyway, today I used a pair of knitting needles to preserve the crosses of the good sections, knowing that it's easy for sections to twirl around and end up rotated if they aren't on lease sticks. After I pulled out the lease sticks, those good sections were secured with rubber bands - messy looking but unlikely to misbehave during the recovery process. Then I took a deep breath, cut off the 120 knotted ends at the knots, and wound the rightmost section back on the beam and secured it.

Next, I unwound the bad sections all the way back to the apron knots, threw the yarn in the trash, and proceeded to wind 4 new sections, after doing a breakage test on every cone I picked up. 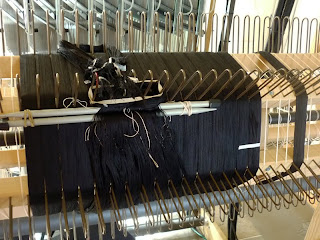 See what I mean? Messy, but secure. At this point, I had 3 more new sections to beam. If some sections have a different thread count than the others, I'll beam those first. On this loom, I weight the selvedge threads separately on film canisters, so the outer two sections had fewer ends and were beamed first, then section 2 through 19. It was 16 through 19 for which I used the cone of weak yarn.

To make a long story short, I'm now at the same, exact point I was yesterday at this time: 120 ends knotted. After unwinding and rewinding 4 sections. $#!t (and other words to that effect).

The irony is that there was a recent discussion on WeaveTech about breakage with black yarn, the theory being that the problem is more likely with black because it may well have started out as another color that didn't sell so it got overdyed to death, but can also happen with other colors if the yarn "ages" too long in the weaver's stash cupboard.

The only saving grace (and I'm proud of it) is that I fixed it before it had a chance to get really ugly, as in, finishing all the knots and pulling the new warp through the heddles and tying onto the apron, only to find that 1 in 4 threads in those sections broke (at random places) the instant tension was applied. I know some of you have been there, done that, and I really didn't want to join you in that particular place :-)

My blessing for the day is "May all your warps be strong and smooth, your wefts colorful and bright, and your cloth a delight to the eye and hand." I'm off to have a good dinner, a soak in the spa, and a night without weird dreams...
Posted by Sandra Rude at 6:03 PM

Yes, the Curse of the Black Yarn. At least you have taken control and Done the Right Thing. This story still gives me the creeps.

How frustrating! Glad you didn't throw good after bad, and did the work to fix the problem before it became catastrophe. Still, I feel your pain.