It's been a while (several years?) since I've used the wool-lycra shrinky yarn to create faux seersucker scarves, so I decided it would be a good idea to exercise the S word and weave a short sample.

The warp is 2-inch stripes of hand-dyed 30/2 silk interspersed with 1-inch stripes of the wool-lycra yarn, both sett at 24 ends per inch. I threaded the silk on shafts 1-12, and the wool/lycra on 13-24. Hey, if you've got shafts, use 'em! It makes it much easier to change the weave structure in different parts of the draft if the warp is spread out over more than just the bare minimum.

The first weft I tried, although not the final color I intend to use, is the same grist. My intent was to use a brown 20/2 cotton/bamboo blend in the "real" scarves, but had some blue 20/2 rayon on a pirn so I used that in the sample (same size, similar shrinkage in finishing). The first couple of pattern stripes were all plain weave. Then I switched to a 60/2 silk weft, and changed the shrinky stripes in warp and weft to a 2/2 broken twill, to give the yarn more room to move.

At the point this photo was taken, I had woven in two thin metal rods at the end of the sample, to make tying back onto the apron more efficient. The pink weft is waste yarn; I doused the web before and after the metal rods with Fray Block, which at this point was still damp. The Fray Block makes sure none of those shrinky warp ends work their way loose while my back is turned :-). 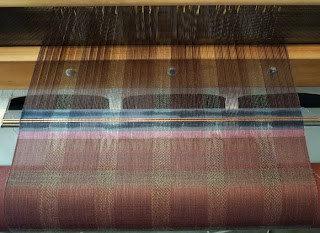 The cloth resembles something like a screen door - it's so open that I can almost read the newspaper through it! Thank heavens for the AVL auto-advance system, which makes it easy to maintain an even beat on such open cloth - just set it and forget it.

After cutting the sample off, and stitching the ends to prevent fraying, I hand-washed it in hot water, rolled it in a towel to remove most of the moisture, and tossed it into the tumble dryer. Typically, it is the heat of the dryer that really activates the lycra component of the shrinky yarn, although just releasing the cloth from the loom tension had produced some puckering.

Here's the sample after drying: 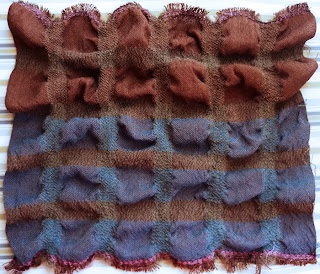 The first scarf was at the 90-inch mark by quitting time; I'll weave to at least 100 inches today, which should shrink to a 65-to-70-inch scarf. Then I'll twist the fringes and do the wet finishing in the "handwash" cycle in the washing machine, followed by a trip through the tumble dryer.

I'll be seeing the customer (an old friend) at a dinner party in a few days, so I want to have it ready for her by then.
Posted by Sandra Rude at 9:11 AM