You may remember the 2 kg of silk thread I purchased in Phnom Penh. It's been sitting on my work table waiting for me to gather the courage to unwrap the parcel and figure out how the thread is packaged.

In a very short session with Google, I discovered that the thread is actually made in Vietnam. The town of Tan Chau in An Giang province, just across the border from Cambodia, is apparently famous as one of the most important silk production areas in Vietnam. There's a charmingly translated page of information about Tan Chau at this link. We went right past Tan Chau during the voyage up the Mekong River.

All this from one little label, the only documentation in the parcel of silk: 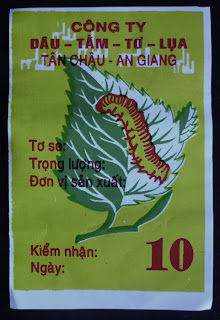 Google Translate tells me that the first 2 lines of text mean "Mulberry Silk Company." Hey, I've seen enough silkworms and mulberry leaves to recognize the logo! Some of the rest of the text says "Avoirdupois" and "Production Unit" but the rest is a mystery to Google Translate. I'm guessing that "10" refers to the size. At the shop, there was another bundle whose label said "3" and it was much, much finer. I'm also guessing that the "10" tells how many strands of reeled silk are included in each thread, because when I untwist a bit, I can see about 10 strands: 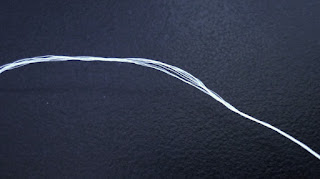 Actually, I'm amazed the camera can focus on something this small! I'm also amazed there isn't any cat hair in the picture..... Anyway, the bundle looked like this as I started opening it up: 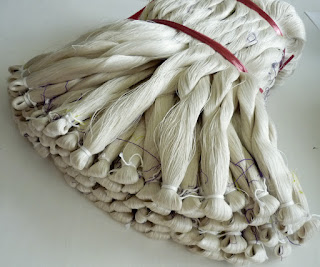 Each group of threads that has a white cotton yarn tightly tied around the end is a single skein which weighs 23.3 gm (that figure probably was 25 gm in Cambodia - it's lost a lot of water weight since then in our arid climate!). 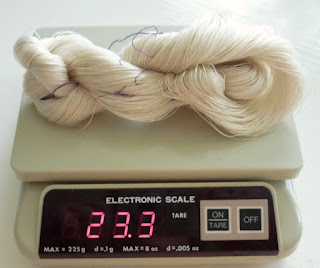 The manufacturer kindly used purple thread to  make several choke ties in each skein, and a different color thread (yellow, in this skein, but it's difficult to see) to mark the cut ends: 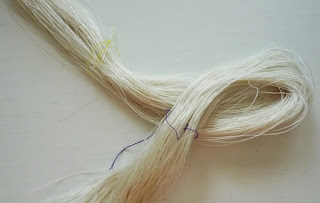 I carefully pulled out one skein to weigh the skein, and to put a length of the thread on the McMorran Balance so that I could estimate yards per pound. Turns out to be 14,400 ypp, or about the same as 60/2 silk. (I hate to think what the size 3 yarn would weigh!) However, the fact that the thread still has sericin in it means it's actually finer than 60/2, and the fact that it is reeled from continuous lengths rather than spun from short lengths means it's not going to "bloom" in wet finishing like spun yarn. So my sett calculations will need to be adjusted accordingly - more ends-per-inch. By guess and by golly... (Sorry, old American/British phrase, meaning "your guess is as good as mine.")

To Be Continued. This is why we make samples; although in my case, they are almost always Full Size Samples, aka scarves. I do have almost 2 kg of this stuff. I can spend a short warp on samples, can't I?

But first, I have to calculate how much yardage I've got, and how much I will need for a warp for several Samples.
Posted by Sandra Rude at 12:06 PM

How exciting. Do I see dyepots in your near future? :^)
cheers,
Laura

My guess, and it's *just* a guess, is that 10 is the number of filament strands making up the yarn. Unless there's some plying structure that I can't see in the photograph, what it looks like to me is tram - a loose-twisted single - and the main issue is going to be that it's easy to shred and tangle. Should work up lovely and soft and shiny, although it may be happier in the shuttle than going through the heddles. Those colored threads are VERY useful - I've taken to doing the same with all my yarns, after getting some marked like that from India.

Assuming that this is 10-strand tram, it may be 10x35 denier instead of 21 denier strands - there are a number of different standards, depending on what the end use of the silk is. 21d wouldn't work out right for the weight your McMorran gave you, but 35 works out about right.

Expect it to lose about a quarter of its weight during degumming, depending on how much sericin is in it - different strains of worm have more or less gum.

Thanks for your comment, Michael. I figure if anybody knows silk, you do! I'm hoping to weave cloth before degumming, since (as you say) there isn't enough twist in this stuff to protect it from fraying in the heddles. Maybe the sericin will protect it enough to warp and weave successfully. Then I'll do selective degumming via some type of shibori process, and lastly dyeing.

the bundles are pure poetry.

you got it from michael therefore i won't add anything else except a suggestion to visit bryan from japanese textile workshops. he got me into various grades of degumming for dyeing.