Comments from the Distant Past: Creating an Interleaved Draft

I usually don't look back at old posts to read comments, only the most recent posts. So I almost missed the comment (in Spanish - thank heavens for Google Translate!) made by "fabbytex" back in April, asking how I made the table napkin design I showed in a post from 2007.

I will try to explain, and I hope this makes sense. I weave these designs on a 24-shaft dobby loom. You could do it with fewer shafts, but not less than 8, and that will give a very different appearance. This is because with only 8 shafts, there isn't room enough in the tieup to have broad areas of turned twill. If you only have room for 1/3/3/1, the design will be broken up into smaller, more diffuse areas of color than I get with 3/1/3/1/1/3/1/3/2/2, which makes broader, more concentrated areas of color. (I reserve 4 shafts for the basket-weave selvedge, so the design of the body of the cloth uses 20 shafts.)

The basic threading unit is conceptually similar to a Dornick twill, like the 4-shaft version shown below. Dornick twill is a way to make a point twill that has no floats longer than 2 ends - no long float at the turning points as with the typical point twill. 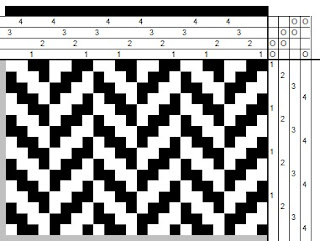 First, I start with a weaving draft that has a threading made up of advancing offset twill, like this one:

Click to see a larger version. Unlike the Dornick twill, in this design each up-and-down unit starts one shaft higher than the unit to its right.

Then I make two copies of this file, each one with the rightmost thread in the threading starting some number of shafts higher than the last, and each one with a different thread color. All three copies are then combined so that they alternate thread-by-thread: one thread from A, one thread from B, one thread from C, etc. Most weaving software has a function to do this easily, called "interleave" or something similar.

Next, I make the treadling a long swooping curve in a networked twill on a 4-end base, and make a tieup that has areas of 1/3 twill and areas of 3/1 twill. I like to include a little 2/2 twill, because it makes a slightly different color blend in some areas. Here's the result, with the basket-weave selvedge added after the 3 files are interleaved. Again, click to enlarge: 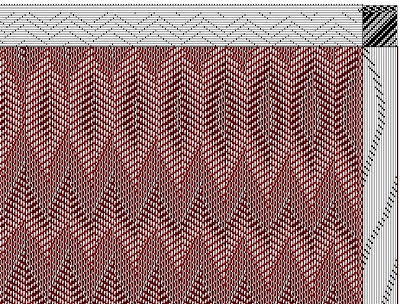 The napkins in the original post were woven with 24/2 mercerized cotton as warp (3 colors, one for each design line) and 30/2 mercerized cotton as weft, in a different color. The warp must be sett much more closely than would be typical for that size cotton in twill. I usually choose a sett that is 25 to 30% closer than if there were only one design line in the threading.

In the draft, the design appears stretched horizontally. However, on the loom, because the warp is very closely sett you simply can't beat the weft in as tightly as the design implies, so the feather shapes stretch back out vertically, as in the napkin on the top of the stack in the image in the original post.

I hope this answers the question. If you like, send an email to me (sandra at 3springshandworks dot com) and I'll send a WIF file of the interleaved design.
Posted by Sandra Rude at 12:04 PM