Okay, so I'm weaving along yesterday on the dahlia image, and between one pick and the next, I hear a sudden, sharp "pop." Turns out one of the drive cables simply snapped right at the pulley on top of the loom. There are 12 drive cables, one for each module. 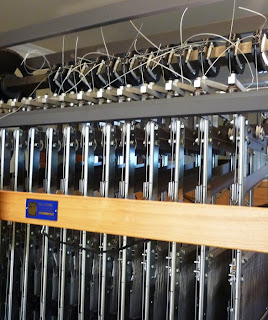 The cable is responsible for lifting hooks and knives. On module 8, a piece about 6 inches long broke off: 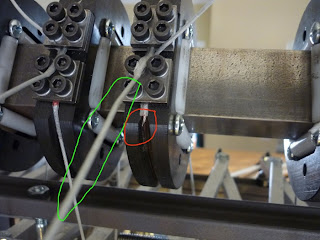 In the photo above, the broken end is circled in red. Luckily, there was a lot of excess length on the remaining end of the cabl, which meant that the cable was long enough so DH was able to loosen all the cable connection points and move the cable 10.5 inches along so that the extra length let it reach all the way around its prescribed path. The extra length is circled in green.

It sounds like an easy task, but keep in mind that there's a tensioned warp on the loom, which makes it very difficult to reach certain parts of the loom. Both the woven cloth and the unwoven warp block access to critical areas. 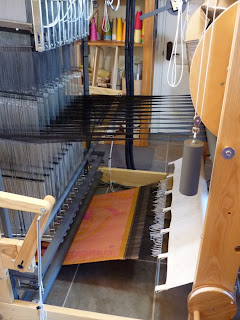 However, as soon as the cable was back in place, I was able to continue weaving. Here's the dahlia at 600 picks (with 800 still to go): 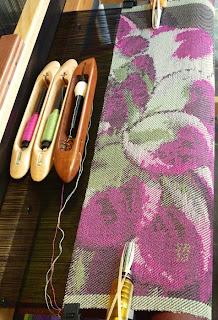 Today I finished the weaving, and will cut off the four pieces I've woven and get them ready to mount and frame. There's only a week until the American Craft Council show!
Posted by Sandra Rude at 2:36 PM

Thanks goodness for an in-studio loom doctor!
cheers,
Laura

that man is a saint!