There are a lot of structures I've never woven, mostly because I fell in love with twills and satins, and never bothered to venture beyond those.

The project I'm starting on the dobby loom is one of the beyonds: multishaft crackle. Because I like to recycle designs, and I've got a large library of networked designs, I did the lazy thing and used a networked threading as a profile draft and converted it to crackle using the "block substitution" function in WeaveItPro.

As a result, two things happened. First, I ended up with an absolutely huge threading, because each thread in the networked design became 5 threads (the 4 threads of a crackle block plus 1 incidental thread, since I'm not repeating blocks). Second, the characteristic feathered edges of a networked design have migrated into the crackle.

Here's a partial shot of the threading draft (after I shortened it from over 3,000 ends to 780) - you can click the image to enlarge: 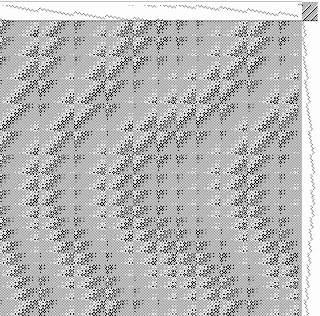 And here's a zoomed-out fabric view: 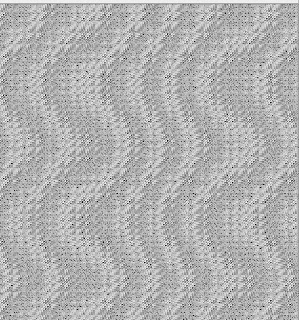 The tie-up has a lot of plainweave in it, along with the twill lines, so I've sett the warp just a little closer than the plainweave sett for the warp, which is 20/2 rayon in olive green. 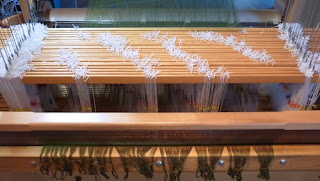 What an interesting threading concept. Lots of depth in the drawdown. Can't wait to see the cloth.

I see bubbles in the close-up. And once I've seen them, I can even see them in the second pic. Interesting.

t is an interesting concept indeed.the feathered edges on crackle i really like that. looking forward to seeing the cloth.

I'm just signing up for the team watching with interest over your shoulder...!