More of this summer's production - a cymbidium orchid and a rose: 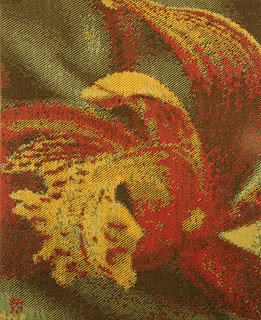 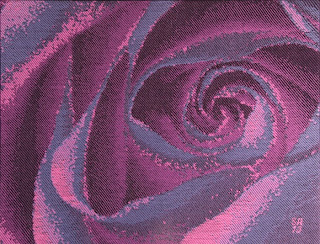 The applications for several craft shows and exhibitions have been submitted, so now I need to decide what to work on next. I've got some new flower designs and several landscapes in the queue for the jacquard loom, and a partly threaded warp on the dobby loom. I'll try to finish threading today, and weave off that warp as soon as I can - it's only 4 yards of cloth destined to become a top for myself.

There are some timing constraints involved with scheduling projects for the jacquard loom. There isn't much warp left on it, and Open Studios is coming up on October 12-13 and 19-20. If I weave a lot on the jacquard, and use up the current warp, there won't be time to get a new warp beamed and tied on in time for Open Studios. During Open Studios I do most of my weaving demonstrations using the jacquard loom, and that's the loom most visitors are fascinated by. So the dobby loom will have to be my main priority for a while.
Posted by Sandra Rude at 10:51 AM