A few years ago, Becky, a fellow member of Central Coast Weavers, purchased one of my scarves. She wanted something to keep her neck warm while paragliding. The difficulty was that the scarf should match (or at least coordinate with) her safety-orange jumpsuit.

The silk scarf she chose was an interleaved threading with scarlet and fuchsia in the warp, and a strong gold in the weft that was fairly close to the color of the jumpsuit.

I've asked her for a photo of herself wearing the scarf and jumpsuit, and although it took a while to get one, here it is. The picture was taken right after her first skydiving experience, as you can see from the certificate Becky is proudly displaying in the photo. 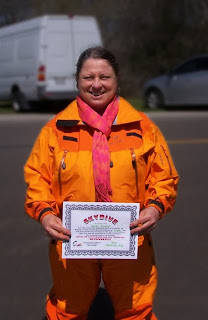 The scarf has kept her warm while paragliding along the California coast, as well as in Europe, and now it's been skydiving, too!
Posted by Sandra Rude at 12:54 PM

That is something only a few weavers can say, Sandra. Thrilling, yes?