It's now finally all clean and stacked on the dining room table. All, that is, except for the reed, which is still awaiting some work with a spare toothbrush. 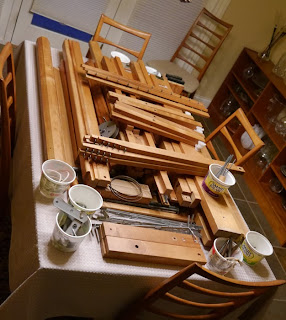 The next step is to figure out how to shorten the jacks and lamms so that they still function correctly and provide an adequate shed. DH plans to make a mock-up with scrap wood and test its operation before he begins to shorten any real (maple) parts.

I've been doing a web search for the jack-and-lamm setup on any 22-24-inch jack looms, but haven't found any that use a similar system. For example, the Schacht Baby Wolf and the Leclerc Compact appear to have lams that stay parallel to the floor, and pull down on the outer ends of the jacks which makes the inner ends push up. The Artisat, on the other hand, has lamms hinged on one side, and they pull down on the inner ends of the jacks which makes the outer ends push up. The resulting action on the shafts is the same - they rise - but the direction of push vs pull differs.

If anybody out there knows of a small jack loom whose lamms and jacks operate like the Artisat, could you point me to photos, please?
Posted by Sandra Rude at 6:35 PM

Perhaps Tom Beaudet could give you some advice?
cheers,
Laura

The loom you are looking for is a Leclerc Minerva. It is EXACTLY like an Artisat, only 24" wide.

There are diagrams on the Camilla valley Farms website - they have a good archive of all of Leclerc's technical documents.

See for example the parts list for the Minerva, which shows line drawings of the lamms on the bottom left of the first page.

I don't have my Minerva any more, so can't send you pictures. However, there are lots of them out there.

I forgot the link: http://www.leclerclooms.com/draw_inst/da_minerva.PDF

Thanks, Diane, the Minerva is the same! I must have missed it when I poked around the Leclerc site.

I have a Leclerc Minerva, but it's on loan to a friend. If you like I can ask her to send me photos - just let me know what photos you want. - Tien

goodness me! i take a break and what do i find when i get back.
you're in for serious fun enjoy!
and happy new loom year.