Next on the Jacquard

Rather than wait a day to get the errant hook repaired, I decided I would just figure out how to "cast out" that hook using Photoshop. In the design file, I made the column for that hook all white, so the loom would not ever bother to try to lift it. Then I highlighted all the columns from there leftward toward the selvedge and moved them left 1 column. That way, hook 393 is doing what hook 394 should have been doing, and everything flows left from there to the selvedge. At the selvedge, where I use an extended basketweave structure, I had to recreate the rightmost column of that part of the design - no big deal, it's easy in Photoshop to copy 1 column, and paste its contents into the next column to the right.

If I used real jacquard design software, like Arahweave or JacqCad, I'm sure there's an easy 1-button fix, but this wasn't really all that difficult once I wrapped my head around what needed to happen.

So I was able to finish the first abstract piece based on a painting by Connie Rose, and began another. Here's the original image, indexed to several values of 3 hues (see the color chip strip at the bottom of the image): 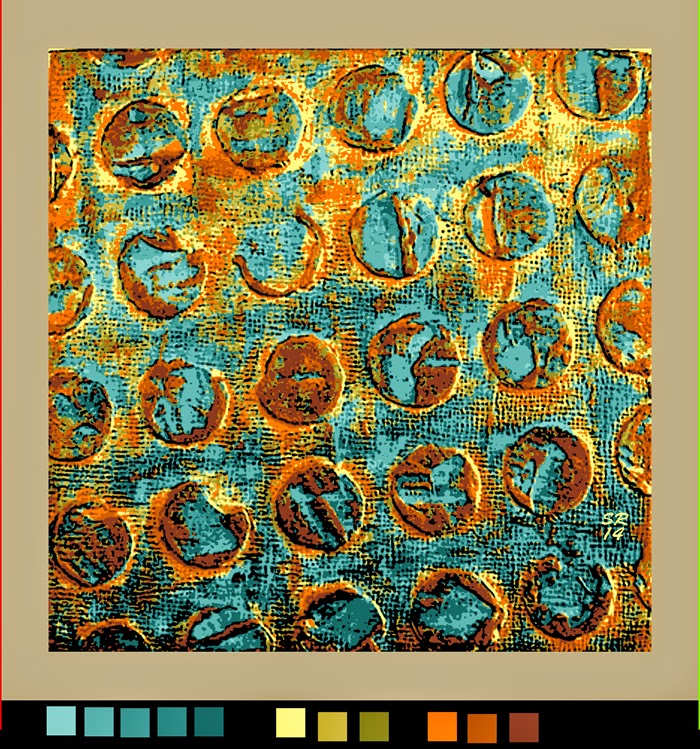 And the lower part of the woven image - I only got to pick #300 by quitting time. The blue isn't the same as Connie's - not as much green in it - but I think it'll work anyway. And it was the closest color in the stash.