...when I shouldn't be allowed near a loom. Or a computer.

So I was merrily weaving along, and finished the current piece on the jacquard loom. Here it is at the point where I had just begun the top border:

As soon as that one was woven, I began the next piece in the queue. I wove the bottom border - no problem. Then I reached the body of the design. After a few picks, I realized that there were some mighty long warp floats in the "black" area. Hmmm. Oh, #$%^%$@! 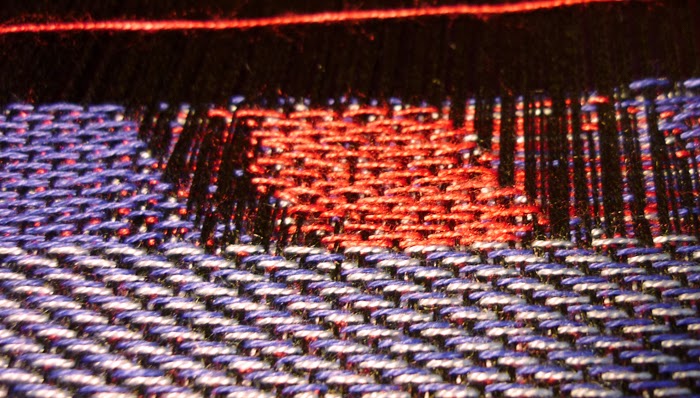 I had completely forgotton to apply a weave to the black areas, and since that meant all-black areas in the design file with no white pixels representing places where weft was crossing over warp(s), the warps were enjoying their freedom and never interlacing. At all.

Back downstairs to the desktop computer I use for designing. Apply weaves, re-save the file, crop it, resize it, then redo the part of the file where I'm casting out one (nonoperative) hook. Back upstairs to the studio. I rewove the bottom border, and held my breath for the first few picks until I was sure those warps were interlacing where and when they should. 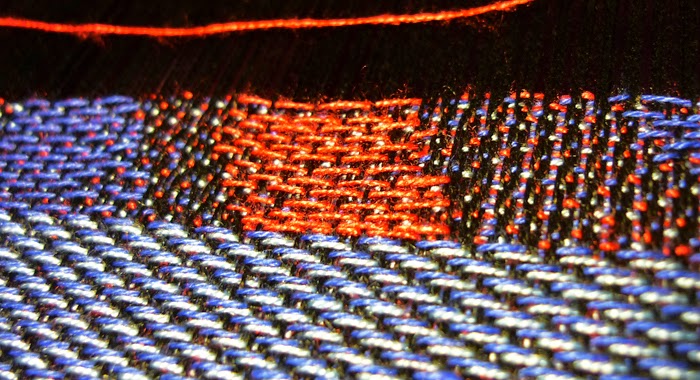 Meg,you haven't been listening! I say that all the time! And the booboos, yes, often enough to not be ashamed to admit to them. It's how we learn after all - screwing up. I never learn from successes, only from disasters.

It's all the 'little' details that we have to keep track of - and some days that's harder than others. :(
Glad you are back on track. :)
cheers,
Laura

Oh, those days, eh? Glad the floats were on top...

Congrats on a successful rescue, rather than a wadder.