The weft for this runner is 30/3 (NeC) unmercerized cotton acquired recently from Webs. In theory, it is the same grist (8400 yards per pound) as the 20/2 tencel warp. However, because it is a 3-ply yarn, it's a bit "rounder" and doesn't pack in as tightly. Also, being unmercerized, it contrasts with the warp in amount of luster - the tencel is very lustrous, the cotton not at all. Because the color is close in both hue and value to the red in the warp, the pattern in the main body of the runner will be visible mostly in the variation of luster. 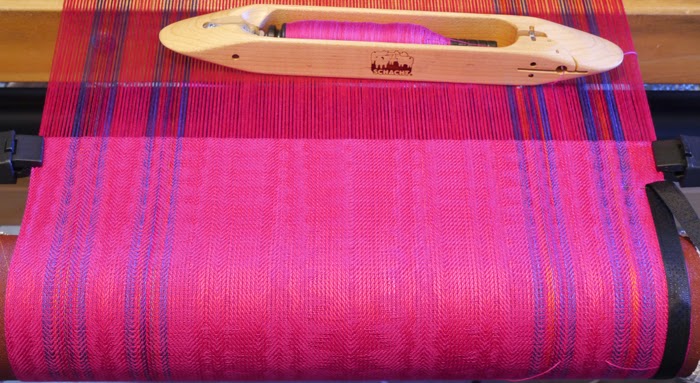 You might be excused for saying, "What pattern? I don't see any pattern!" It does show up, though, at certain angles and in the right light, as in this shot taken under the loom as the runner winds onto the cloth storage beam. If you click the thumbnails, you should be able to see what I mean. 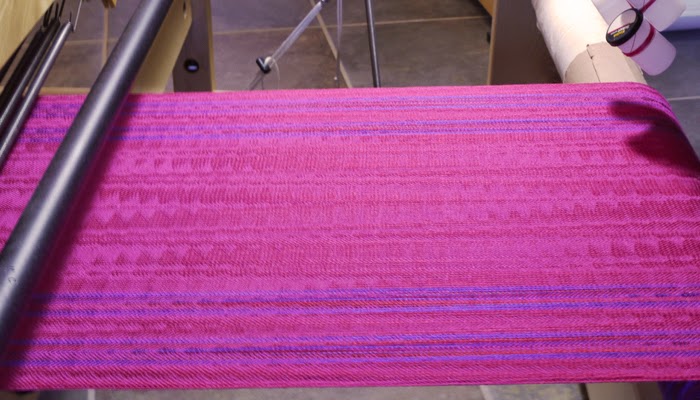 The lamp over the back of the loom is flourescent, which brings out the blue tones in the cloth, unlike the lamp over the front, which is halogen and much truer color. The poor camera is at its worst when photographing red - the color sensor for red is its weakest feature - and I find it difficult to get accurate color rendition if the predominant color in the image is red.
Posted by Sandra Rude at 6:25 PM

I have been finding I get better (more accurate) colour when I use the setting on the flash that is supposed to eliminate 'red eye'. My camera doesn't 'get' reds, either. :(