On the AVL dobby loom, I'm about halfway through sleying a warp for four table runners of alternating threads of lime green and cerulean blue in 20/2 Tencel in an interleaved threading shown in this post. The first shot shows the warp, and the second shows how the loom's computer components are mounted on top of the loom.

This is the result of several requests from fellow members of WeaveTech, where a discussion on how to mount a laptop on an AVL loom has been a popular topic lately. The bracket hanging from the castle could easily be adapted to form a tray for a laptop, but I haven't needed to do that because the desktop computers I use are second hand and cheaper than a laptop would be! 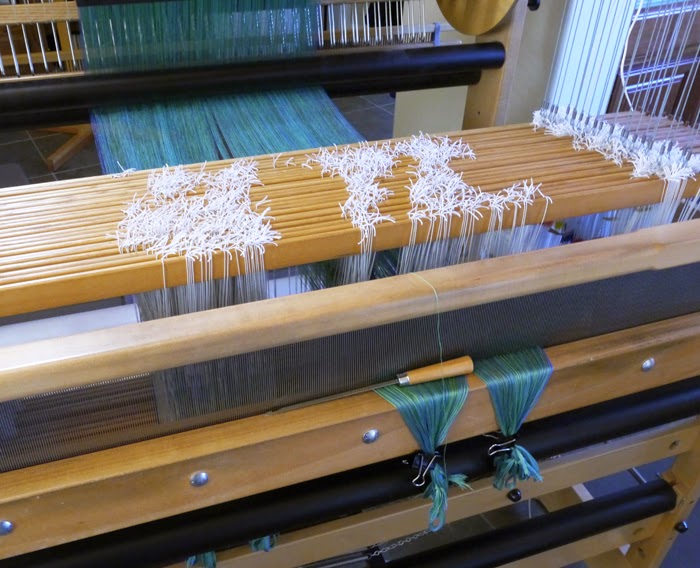 In this second shot, you can see the flat-screen monitor mounted (via a TV bracket) on a U-shaped wood construct that hangs from the back of the castle. The black box to its right is the control unit for the DH-built shaft lifting motor system. Above the castle are the AVL control box and my Windows computer, which although it is on its side, has had no vibration-related problems with the hard drive. The keyboard also perches on top of the castle, since I mostly use a mouse to interface with WeaveIt. The mouse lives on a mousepad attached to the bracket where the original AVL loom bench would have been attached. Since I prefer an adjustable-height draftsman's chair for weaving, the loom bench was never installed; in fact, DH probably used the wood for some other project years ago!

The jacquard loom is a blank slate at the moment, awaiting the next jacquard project. Before the last few craft shows, before I cut off the woven pieces, I wove a stick into the warp with waste yarn before and after it. That stick is now lashed to the apron rod, so the warp is all ready to go as soon as I decide what the next project will be. There are a few designs queued up, but no decision yet...

The jacquard loom also has the flat-screen monitor attached (via a TV bracket and a wedge-shaped block of wood) to the castle of the loom. The PC itself, however, is the black unit that sits on top of the AVL jacquard control box at the back of the loom, as you can see in the second photo. 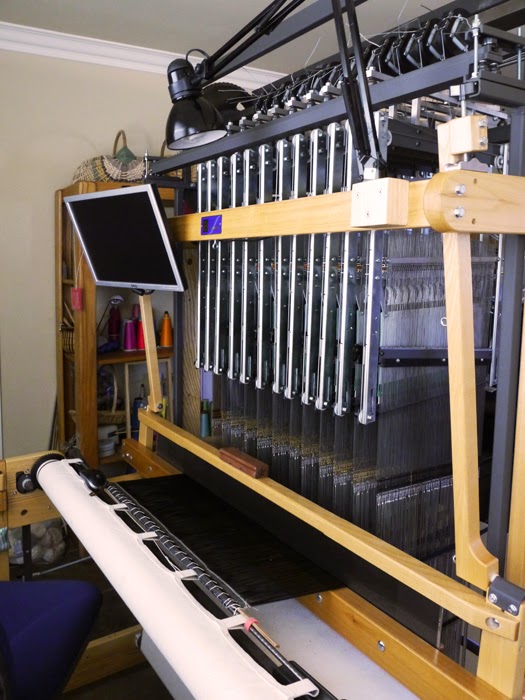 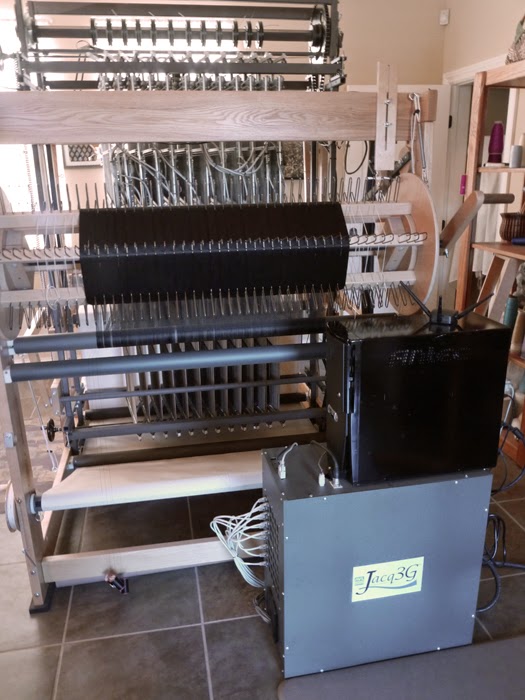 Both mouse and keyboard for the jacquard loom computer are wireless. The keyboard hangs on the wall behind me as I weave, and the mouse hangs on a cup hook attached to the inner side of the left front upright. Most of the time, I only use the mouse to control the behavior of the loom driver and the keyboard gets very little exercise, since I do all the design work on my desktop computer in the study, and only use the loom computer to drive the loom.

May all your warps in the coming year be problem free, well tensioned, and give you great satisfaction to weave!
Posted by Sandra Rude at 2:08 PM

Request? Behest? I'm still stuck at your crab post. But seriously, yes, hear, hear to a well-tensioned and trouble free 2015.

Sandra, great to read about your setup at the looms. Thanks for sharing. have a great weaving year.

Happy weaving in 2015! Love the warp colours and interesting to see the way you fit the necessary computer parts around the looms.