Is It Really Almost May?

And here I am, still on holiday from the studio. A little knitting, some spinning and plying, but mostly trying to become fully mobile again. The surgeon keeps reminding me that full healing can take a year or more, and to keep at the exercises (but don't overdo them).

We have made a few day trips out into the California springtime countryside. As you might have seen in the news, the desert-like countryside is really stimulated by the rainfall this past winter. (Our calculation at home is almost 3x the normal. Twelve inches annually, between mid-October and late April, has been typical for the years we have lived in this part of the state, about half-way between the San Francisco/Oakland/San Jose area and the Los Angeles basin to the south. This year, we measured over 35 inches.)

Wildflower seeds can wait many years for enough rain before they germinate. Early in April, we drove east to the edge of the Carrizo Plain National Monument, and although we were about a week early for the maximum colorful display, this was typical of what we drove past: 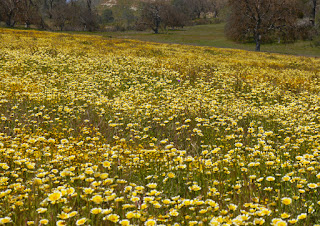 The common names of some of these include tidy tips, fiddleneck, shooting star, owl's clover, and baby blue eyes. It was actually difficult to find a place to take a photo without another 20 cameras clicking away within the frame. Where a low spot was damper than the hillsides, the variety was much greater, and the stems of the flowers taller. The ones above were perhaps 6 inches maximum, the blues and whites in the next photo were up to 24 inches: 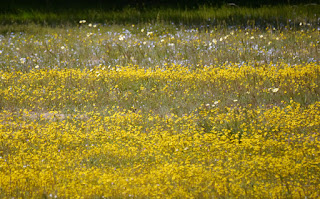 Closer to home, and 10 days farther into the season, we now are enjoying lots of native lupines and California poppies. These are on our property, so I don't have to go far to appreciate the result of the rainfall: 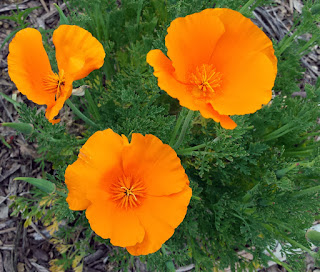 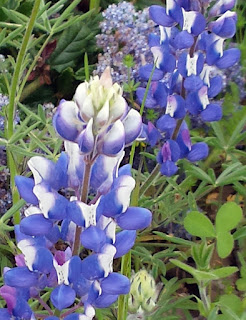 Both of these have very recognizable foliage, so I can persuade DH to let them have their days of glory before he pulls them up.  And by that time, they've scattered the seeds for the next season.

Tomorrow, I'll post some pictures of our domestic plantings, the purposeful ones, not the spontaneous and accidental ones. Happy Springtime!
Posted by Sandra Rude at 8:34 PM

I'm just a little over 2 years from my by-pass surgery and only now beginning to feel like I am functional enough to start going to the gym and regaining some of the fitness I lost in the year prior to the surgery, then the recuperation from it. Patience, Grasshopper!

good to hear that you are about.
Teresa

yep,sometimes hiatus bring flowers :D ask me how i know