Back Home, and Straining the Brain

We arrived home last Friday, after spending a few days near London with friends from our years living in Surrey/Berkshire. Thankfully, the timezone disruption westbound is an easier adjustment than in the eastbound direction. For me, at least.

The first task on arrival back in California was to begin the design process for a jacquard project for a friend from the local weaving guild. It involved learning a new-to-me technique: designing in Photoshop for a discontinuous supplementary weft. Given the time change, even thought it was less disruptive, my brain still refused to wrap itself around a handful of new ideas for supplementary wefts.

The project is based on a hand-drawn postcard from my friend's daughter, a really clever drawing that is intended as a gift from my friend back to her daughter. The image is in 3 colors, white, black, and red. Simple, right? Not so fast...

The red areas are discreet, and were obvious choices for brocade, aka discontinuous supplementary weft. I decided (after consulting Becky) to use my standard black warp (20/2 mercerized cotton) in a 7/1 satin for the dark areas, a white 16/2 bamboo ground weft for the white areas, and a soft wool for the red brocaded areas.

The instructions for weaving brocade include weaving the cloth face down to lighten the lifts in the brocade areas. A first for me. Now, after a few samples to verify aspect ratio, I find I need a mirror on a long stick so I can check what's going on on the 'face' of the cloth. No selfie sticks in this household, so we'll have to improvise.

Here are two photos I took while weaving samples. First, the weaver's view of the cloth with brocade almost invisible. Next, the view from under the cloth, showing most of my test strip. More images to follow, as the project develops.

The wool supplementary weft is on a small, low-profile shuttle, and white ground weft on my favorite end-delivery shuttle (not shown). 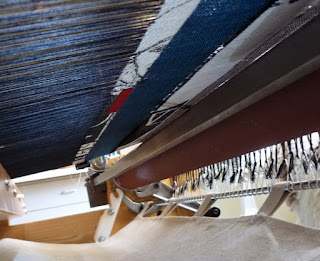 After loosening the cloth apron, I was able to get my small camera into the space under the cloth to photograph the 'right' side. Sorry, it was only a 1-inch strip! At least the red brocade area looks good, and I managed to get the appropriate weaves in the right places (Thank you, Alice and Bhakti!)

At some point, I will post some photos of our trip, which was wonderful, except that I forgot to pack the combination of cables that let me upload photos from my camera to my tablet, from which I can post to the blog. DH and I took lots of photos, but it was not feasible while cruising to move them from cameras to tablet.

Welcome home! We will be heading across the pond early next month. Can hardly believe the summer has gone so quickly! I'm hoping for a relatively easy transition but will just have to wait and see. :) It's been a while since I've traveled that far.

Welcome home! If you are weaving the brocade on a loom that the shafts are lifted electronically or by the air compressor, why would it matter if the fabric is woven wrong- or right-side up?

At least we aren't the only ones who neglect to bring the correct cables for moving photos from cameras to tablet. Looking forward to seeing both your brocaded fabric and travel photos.