The new activity involves not new cloth, but old cloth. When the AVL Jacq3G loom  was new, and I was a new jacquard weaver, a lot of smallish pieces came off the loom that were not successful as  wall hangings, mostly because I was still learning about color choices. The cloth was well-woven, without significant flaws, but nobody would consider it artwork.

Fast forward to this year, and that good-but-not-spectacular cloth has found its destiny: small zippered bags that could be used as knitting tool kit, clutch purse, cosmetic kit, whatever. And small mobile phone pouches - which are easier to fabricate because no zip is required.

Here are a few examples of what will be in the Central Coast Weavers guild's annual sale. I tried out several methods of installing the zips: hidden (lapped) zips, centered-but-mostly-hidden zips, and centered-fully-exposed zips.

The inspiration for all this is Alice Schlein , as is the case for a lot of the ideas percolating in my brain. A few years ago, Alice sent me a small zippered bag, which found its purpose in life as a knitting sundries kit. It was made from remnants of several of Alice's jacquard-woven designs. I figured that other fiber folks would find a similar bag of use, and I certainly have lots of jacquard cloth that fits the bill. So, here are a few samples: 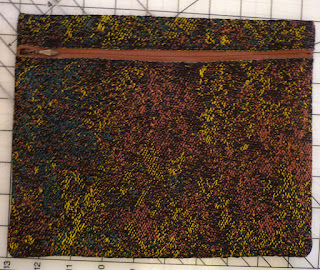 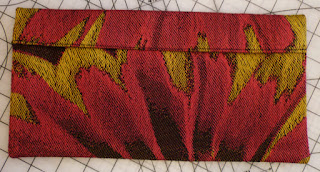 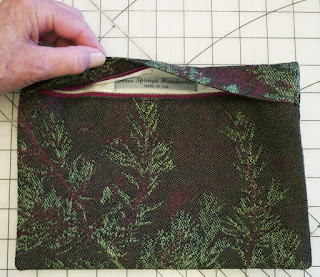 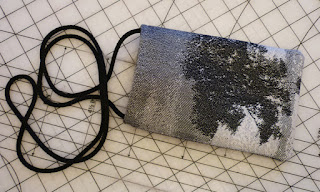 The two red pics are the front and back of the same zip bag. The last is a mobile phone pouch with crossbody strap and an interior pocket for credit cards or ID.

There's only been time to make a few, and one has already sold, before the guild sale even started!
Posted by Sandra Rude at 10:47 PM

I love that red one! And the last two as well. The first isn't my fav, but it will be someone's.

These bags are terrific. Sometimes it is a shock to find that the second life of a piece is more successful than the first. But a beautiful object has an integrity of its own, no matter what the original intention plan was.