The Dyepots Have Been Busy

I'm trying to queue up a series of projects. First up is based on a cardinal red warp of commercially-dyed 20/2 rayon, destined to be woven in multishaft crackle using a group of hand-dyed analogous wefts. 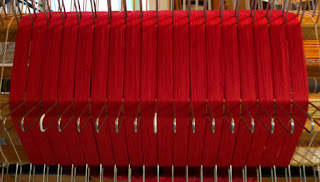 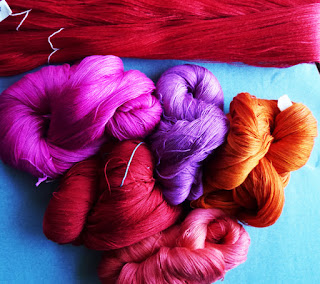 The weft skein across the top of the second photo is still the same hue as the warp, but will soon be overdyed in a deep purple. That is, if it still has any available dye sites left. It's pretty saturated already, but at least I can nudge it a bit darker. The other weft hanks were all overdyed from a cone of the same rayon that arrived here in light bubblegum pink, and has been converted to various darker colors during it's stay in my studio.

The red warp has enough yardage for 3 scarf-length pieces, and 3 shorter pieces (either cowls or table runners).

The project following that will be a series of 10 towels using an interleaved threading on 20/2 unmercerized cotton. The additional warp density should make the towels a little more absorbent. 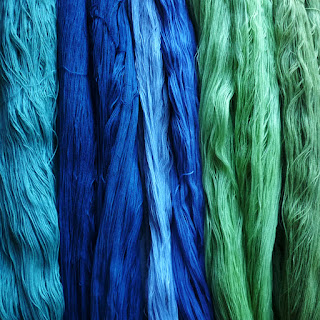 From left, Warp B, Warp A, 2 blue wefts and 2 green wefts. The rightmost weft didn't come out of the pot dark enough, so it is destined for another dye process.