Cotton, two shades of blue; the dyed skeins were pictured in this post. Towels-to-be.

The first few sections on the sectional beam look like this: 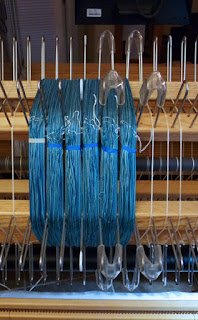 I'm winding four threads at a time, two of the aqua and two of the darker blue, making a 2:2 cross. Because of the difference in value, the fact that there are two threads on each side of the cross isn't a problem - it's easy enough to differentiate them while threading. Here's the setup: 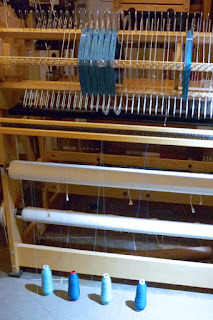 The threads come off the cones and through the dents in the raddle, then back to the warping wheel (not shown).

It has taken a while to get to this point, because I needed surgery to remove my spleen (which was causing problems elsewhere in my system) and that necessitated a few days in hospital, followed by a few days in an armchair at home, catching up on reading and knitting but not doing anything pysically strenuous or mentally demanding. I'm better now, but it will take some testing to be sure that the removal of the spleen accomplished the desired result.

All my best wishes for your recovery - and that the surgery does what you hoped it to do.
Stephanie S

hope all is well and that you recovery fast.