Now that we're home again (after a somewhat more adventurous holiday than expected - more on that later), I have begun towel #8. This one uses the bright lime green weft of 36/2 cotton that appeared on towel #5, but in a very different liftplan. 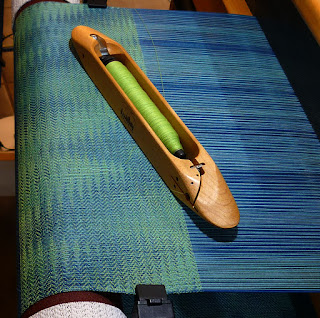 The week on the river cruise on the Dordogne and Garonne rivers in the Bordeaux area was busy but lots of fun. Good food, visits to some really spectacular chateaux, and many opportunities to taste wonderful Bordeaux wines.

After the cruise, DH and I rented a car and drove southwest of Bordeaux into the beautiful countryside of Aquitaine to stay a couple of days with Stacey Harvey-Brown (an English jacquard weaver and fellow member of Complex Weavers) and her husband Graham. DH had fun helping Graham to start a batch of ale (Graham is an aspiring craft brewer) and of course Stacey and I had time for lots of textile talk.

After turning the car back in and boarding the TGV (Train Grand Vitesse) to Paris, I managed to have a heart attack brought on by a lung infection. Fortunately, the new pacemaker did its job perfectly, saving my life in the process. The train goes to the Gare Montparnasse, where a flock of EMTs from the fire department along with a group of Croix Rouge emergency personnel met us with an ambulance on the train platform! Luckily, Montparnasse is just a short distance by ambulance from Hospital Saint-Joseph, the leading cardiac care hospital in Paris. I spent the next 5 days in the ICU there, with excellent care by both doctors and staff. We managed to communicate, between my elementary French and their much better English!

Since I was forbidden to travel by air for 2 more weeks (tooo much risk, between the altitude and the dry airplane air), once I was discharged from the hospital, we took the Chunnel train to London to spend those 2 weeks with good friends near Windsor. That was an environment much more conducive to recovery than either the hospital or a hotel.

Anyway, we're finally home, I'm enjoying my own bed, and feeling much better. The poppies and wild lupine are in bloom, the weather is warm, and I finally have enough energy to weave. I'm counting my blessings this Easter weekend.
Posted by Sandra Rude at 12:06 PM

Oh no! I’m so glad to hear that you got excellent care when you needed it, and that you’re back home and feeling better. Your towels are of course beautiful!

Oh my, that's a bit more excitement than was needed! I am very glad you were well cared for and are home safe and sound.

Oh my, a little too much ‘adventure’. Glad to hear you are feeling better.

Glad to hear all is well, Sandra!

Sandra, so glad to hear that you had such good care! Not what one wants to go through on vacation though. I love your towels and happy to see that you are back weaving.

Sandra-- I'm pleased to hear that you received good care and are doing well! Sorry that you had another heart attack. Happy spring!

Oh Sandra! So glad you're well again! And that you had a wonderful trip, heart attack notwithstanding. Take good care of yourself! xx