The next project on my list is another run of wood scarves. Wood-derived thread (tencel), dyed with colors extracted from wood (see earlier posts for photos of warp and weft skeins), and woven in designs that emulate wood-grain patterning.

Here's the warp, all beamed and ready to thread. It's interesting how different the two warp colors look on separate cones than they do when interleaved thread-by-thread on the sectional beam. 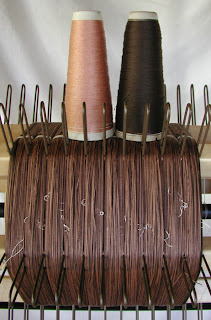 The draft consists of two very different design lines. One is a large, nonrepeating networked curve (threaded in peachy tan) and the other is a very steeply climbing networked line (threaded in dark brown). The steep line occasionally changes its angle of climb, which results in a line that varies in thickness. With a medium-value weft, sometimes one design line predominates, sometimes the other. Here's a partial screenshot of the draft. 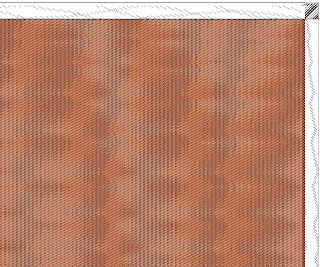 The thumbnail version of the screenshot doesn't quite capture the interplay between the two design lines. Try clicking the image to enlarge it - the bigger version may be clearer.

I've used this same treadling for scarves in the water series, where it makes very nice wave shapes. Here, it should look sort of like rough-sawn timber. The zig-zag of the treadling starts small, grows, then shrinks again. This gives it a repeating visual rhythm, but a more organic look - after all, waves aren't all the same size, and who can use a saw with exactly equal strokes each time?
Posted by Sandra Rude at 12:38 PM

This is great. The idea of having two different network threading sequences in the same warp never occurred to me.

All of your work looks great!