In a comment on the previous post, Inge from Denmark asked "I wonder how you keep track of the complicated threadings you use?"

Greetings, Inge, and thanks for reading the blog! Those threadings would be impossible to accomplish without errors if I didn't have a computer dobby loom. There's a technique that I first tried after reading a posting on WeaveTech, called "treadle your threading."

With a dobby loom, if you have a draft that has a complicated threading that would be difficult to thread (that is, if it's not a straight draw or an easily remembered advancing twill), all it takes is a few simple steps to get the loom to help with the task.

I'll show an abbreviated example here, using a smaller draft than my usual ones. Here's the original draft, with three interleaved design lines. Note that it has a twill tieup (with the upper 4 rows defining the basketweave selvedge) and a treadling that is different from the threading. It may be easier to see if you click the thumbnail to display the larger version. 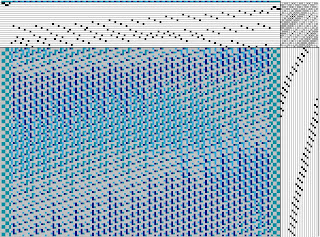 First, I tell the weaving software to make the treadling identical to the threading: 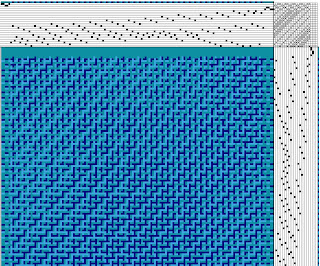 Next, I change the tieup so it raises only 1 shaft per treadle. 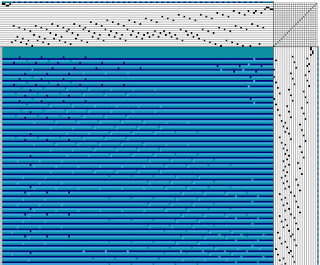 Then at the loom, I "weave" the draft. Each time I press the dobby treadle, it lifts one shaft, in the same order as the threading. I pull over a heddle from that shaft, and thread it. Press the treadle again, and it lifts the next shaft from the threading; pull a heddle, thread it. Etcetera. With interleaved threadings, with no easily remembered warp sequence, this is a miracle of accuracy. I only have to be sure I thread the warp ends in the right order (the current warp is a 3-color rotation) but I rely entirely on the loom and the software to tell me the right heddle.

For each project, there's a folder on my computer. In that folder are drafts for all the variations I plan to weave on that threading (for example, water1.wev, water2.wev, water3.wev, etc.) plus a file that is the threading draft (usually water-thread.wev).

I first learned to treadle the threading from Ingrid Boesel who posted it on WeaveTech. I love it and have shared this method with many weavers. OIn January, Ruth in Sarasota thanked me for sharing this idea for her computer-assisted loom, but said that she found it most helpful for threading her workshop loom. Just lifting the appropriate shaft helped her to avoid mistakes and made it easier for her to grab the correct heddle.
Bonnie Inouye

Thank you so much for sharing. I certainly will use that method on my next project using my computer assisted loom.
I really love to achieve new methods.
Im so fascinated of your work using interleaved threading and ancious to try it, and with this method the threading is no problem.

next to design programs and computer assisted dobbies that's one of the major inventions for weavers.
weaver still has to keep an eye, but no comparison.
congratulations on your new camera!