Oops! I Did It Again (Another New Toy)

This one is a lot bigger and a lot more expensive than the little camera, and hopefully won't become outdated quite as quickly. 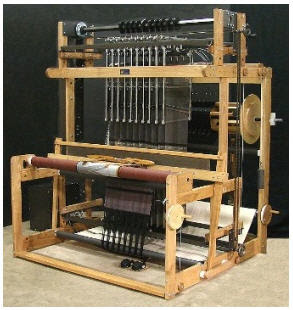 I officially placed an order for the AVL Jacq3G loom. Eight jacquard modules (960 hooks total), 48-inch frame (so the beams and other accessories are interchangeable with my AVL dobby loom), extra length on the frame (so a stool and I will fit in there to tie on warps), a double-box fly shuttle beater, and a bunch of other add-ons.

On my last visit to the factory, about a week ago, the loom performed perfectly during my test-weaving session, so I'm pretty confident that all the hardware glitches have been resolved. I was able to weave error-free for 400 picks on a warp sett at 60 epi. Earlier test-drives had been on a warp at 30 epi, and some of the problems seemed as if they could be caused by (or exacerbated by) warp density so I insisted on a test at a density closer to what I usually weave, just to be sure everything was working properly at the denser sett.

Order lead time is 16 weeks, though, so don't expect to see any jacquard work here until probably November at the earliest. Which means I can't exhibit any jacquard work at next year's big craft shows, because (a) the application deadlines for most 2010 shows are this summer, and (b) even if I had work ready to exhibit I couldn't, because applications are made in strict categories. If I apply in the "wearable fiber" category, I can't have work in the booth that fits into the "decorative fiber" category. That's forbidden and can mean immediate expulsion.

And if I weave wall-hangings on the dobby loom, and apply in the "decorative fiber" category now, the dobby pieces and the jacquard pieces would be sufficiently different that the shows could also expel me because the work exhibited differs too much in style from the work that was juried.

All in all, even though I've lost a year of exhibition possibilities (at least, through my usual sales channels), I'm thrilled to finally be on the path toward jacquard weaving.

Eventually, after the "new car smell" wears off, I plan to make the loom available to other weavers on a rental basis, and at some point will add 4 more modules, for a total of 1,440 hooks.

When my mother passed away last year, she left me a little money; because she was an artist herself, I'm sure she would agree this is the perfect way to use her legacy.
Posted by Sandra Rude at 11:14 AM

Wow - congratulations!!! I eagerly await seeing what you'll do with a jacquard loom. So cool!

And yes, I'm quite sure your mother is smiling. :D

Wow! That is fantastic! I too think it is a marvelous way to use the inheritance from your mom. Art from art and love.

I always look forward to reading your blog posts - this just adds to the thrill. :-)

Congratulations! I know how much this means to you. Looking forward to seeing more great work from you on this loom.

You are one lucky lady. Don't forget about us CAL weavers, we (I) need your inspiration also.
BVertner

She is truly a thing of beauty. I would be spending time just look in awe at her. I will enjoy watching your upcoming exploits on this challenging piece of equipment!

How exciting! I can't wait to see what you can create on this new loom.

Wow Sandra, what a beauty. I can hardly wait to see what you will do with it. I am so excited for you.

Congratulations on the new toy. I just know you will love it. Can't wait to see the exciting new stuff you will be weaving soon. Your mom would approve.