The show was a lot of fun. Two large rooms, one smaller room, and a long corridor, all filled with fiber works!

Quilt Open, in the corridor, featured a lot of really wonderful small format (12x12 inches or less) quilts. One of my favorites, after Connie Rose's two little gems (and I'll let her post pictures of them on her own blog), was this piece by Diane K. Bird called Ring Around the Ninepatch: 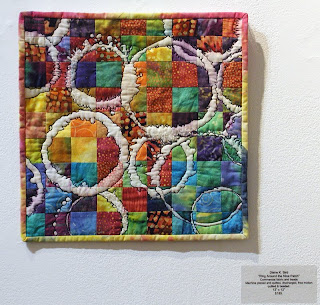 A friend and I were discussing the piece, and trying to decipher how it was made, only to find the artist standing behind us, nodding and saying "Yeah, that's about right!" We figured that the quilt was pieced, then the white rings were discharged out, and the black stitching around the "watermarks" was added.

I couldn't find a website for Diane, but there are other examples of her work here.

In the smaller room off the corridor were Michael Rohde's Houses for Nomads series of tapestries, inspired by travel in Tibet. You can see his work on his website, although there aren't any of the works from the exhibit there yet.

In one of the larger rooms was an exhibit of work by three of the members of Designing Weavers, Deborah Jarchow, Brecia Kralovic-Logan, and Geri Johnson-McMillin. Here's a shot of a group of Geri's jellyfish, woven of monofilament in various colors and sizes. These critters range in size from maybe 4-6 inches to over 2 feet in diameter: 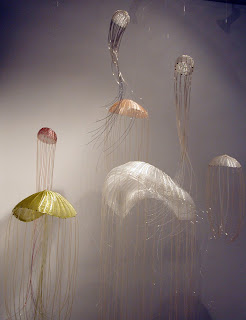 In the last of the large rooms, Fiber Open incorporated a wide variety of pieces, from a pulled warp tapestry by Nicki Bair and some wonderful coiled baskets to an indigo-dyed, handwoven piece with both loom-controlled and conventional stitched shibori (I neglected to write the artist's name down, but I've seen her work in Fiber Art magazine recently), several sculptural forms, and one jacquard weaving by Ruth Tabancay: 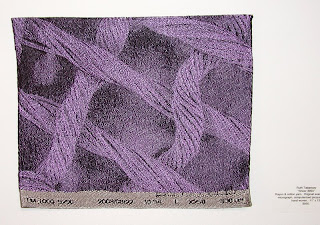 Ruth doesn't seem to have a website, but I gleaned from a brief google search that she's a former microbiologist, and many of her weavings are based on images captured with a microscope. Every weaver should be able to recognize the structure illustrated here - our old friend plain weave, captured in magnificent detail.

All in all, a very satisfactory day!
Posted by Sandra Rude at 1:38 PM

Looks like it was an amazing show! And thanks for the mention!

Such wonderful pieces of art. I love especially the jellyfish, they are so amazing!

enthralled by those floating creatures!thanks for posting.