Getting Ready for the Jacq3G

More preparations underway. On the advice of Sheila O'Hara, who uses an AVL jacquard loom of the earlier generation, I've been making some loom files. They're not really terribly exciting visually, but should be useful now and then. 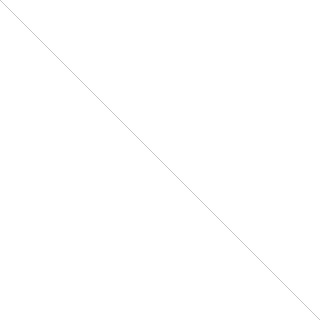 The first one consists of a white square, 960 pixels by 960 pixels, with a 1-pixel-wide line of black traveling diagonally from upper left to lower right. It's designed to lift one hook at a time, to make threading easier and more error-free. I'll probably only use this file once; after that, I'll tie on and pull through instead of rethreading, except in the unfortunate (if not tragic!) case that Alice Schlein recently experienced, in which a warp refused to cooperate and broke rather than allow itself to be pulled through the heddles.

What I don't know yet, having never physically threaded a jacquard, is whether it is easier to work from left to right, or from right to left. On the 24-shaft loom, I thread from right to left. The unthreaded heddles are all pushed off to the left side until I need them.

On the Jacq3G, you can't push unthreaded hooks aside. Each 120-hook module is set on the diagonal, with the right side closer to the weaver than the left. The slant is adjustable - that is how you change from one sett to another, by rotating the modules and thereby making the hooks closer together or farther apart. One can make the sett as wide as possible for ease of threading, then rotate the modules to the sett appropriate to the weaving.

These files are similar in concept to the files I create for threading the 24-shaft loom (described in detail here), in which the treadling is identical to the threading, and the tie-up lifts 1 shaft at a time, thereby telling me which shaft to pull the next heddle from. Before I began using the threading files, I used a lot more colorful language, turning the air blue around the loom as I discovered threading errors in the middle of a complicated threading. Usually these were only discovered when I got to the last heddle and had too few threads, or too many threads left over. The "treadle your threading" method has curbed the errors (and the bad language) dramatically.
Posted by Sandra Rude at 11:00 AM

bless whomever invented the treadle your threading method. a statue is due.
good to hear the show went well.