When we installed the new computer for the jacquard loom, it got some other wireless stuff - Internet, keyboard, and mouse.

I had planned to use a small clipboard as a mousepad, and thought I would make a little pouch for the mouse that would hang on the clipboard, which would hang from a cuphook attached to the loom. Way too complicated. When there's cloth being woven, the mouse doesn't need a mousepad - it has cloth to play on. So instead of a pouch, the mouse got a new tail, which means I can hang it on the cuphook where the clipboard would have gone. Much simpler. 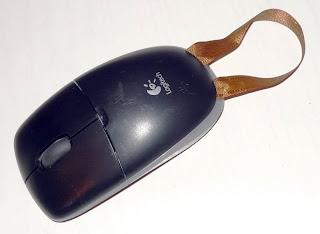 All it took was a loop of seam tape. I popped off the top rear panel of the mouse (the panel with printing on it, which gives access to the battery compartment), laid the loop of tape into the body of the mouse, and replaced the panel. Presto! Hanging loop!

On a more weaving related note, we installed the temple rollers. I was having some trouble with draw-in and decided it was time for the temple roller. It meant there was a little glitch in the picks-per-inch for a little while, as you can see in the picture, but the draw-in is now history. I'll try to get a close-up picture of the temple roller mechanism tomorrow. The temple roller subsystem is just another thing that has to be deactivated if one needs to back up a couple of picks, but that's okay with me. 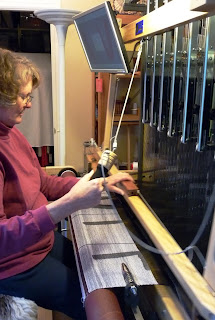 DH also converted the center-pull fly shuttle cord (which I didn't care for AT ALL) to a side-pull cord. The problem with a center-pull cord is the picker return, which means that every time you pull the cord, you're fighting the resistance of the return (a springy rubber tube) on BOTH sides of the beater. Way too much like work, the kind that builds up unwanted muscle (or unwanted muscle pain) in the wrong places.

In the picture, I can see that I'm leaning back away from the loom. If I'm not careful to lean back, and to keep the hand that pulls the fly shuttle toward me (away from the loom) the cord hits the jacquard modules. We don't want that to happen. Too much risk of damage. So it's going to take some repositioning of the chair and some retraining of me to make this work.

It remains to be seen how the side-pull shuttle will work when I need to use both of the levels of the double-box beater. For now I'm only using one shuttle, so it's a null issue.

At any rate, progress is being made on several fronts. We fixed one errant hook problem, but two remain.
Posted by Sandra Rude at 6:16 PM

very elegant solution for the mouse.
good to hear of your progress