In a comment on the previous post, Jackie asked whether it was a temple she saw in the second picture, the shot of scarf #5.

Yes, it is a temple, sort of. Actually, it's more like the inverse of a temple. All credit for this setup goes to Bill Koepp of the WeaveTech list, who once upon a time mentioned it in a post on that list. I've been using it ever since.

A conventional temple, whether made of metal or wood, works by stretching the cloth at the fell by virtue of little sharp teeth that protrude outwards from the ends of the wood or metal struts. The struts are adjustable, but in predetermined intervals that may or may not coincide nicely with the width of your cloth.

So, the two reasons I use the inverse temple are:

1. It has no sharp little teeth. I tried a temple that had teeth, and found that the teeth did damage both to the shuttle-race or (which was even worse) to me. Used on fine cloth, it also sometimes left little holes at the selvedge that didn't always disappear during wet finishing. Instead, I use a gadget called a crocodile clamp or sometimes a tarp clamp, that has rows of interlocking ridges running across the mouth of the clamp, and is adjustable so it'll grip on anything from heavy to fine cloth. I've used it on 60/2 silk and 3/2 cotton with equal success.

2. It is infinitely adjustable width-wise. Doesn't matter how wide your cloth is. You won't ever under-stretch or over-stretch.

This temple is made of three simple things: a pair of crocodile clamps, two pieces of strong cord long enough to reach from the selvedge to the side of the loom and then hang over by a foot or so, and a selection of .5 to 1 lb fishing weights. Oh, and a couple of large heavy-duty paper clips. Tie a cord to each clamp, with a fixed loop at the other end. Make the clamp grip the cloth just below the fell. Hang the cord over the side of the loom. Bend a paper clip so it's shaped like an S instead of like a long doubled loop. Use the paper clip to hang fishing weights (I usually use several pounds on each side) off the end of the cord.

Depending on the configuration of your loom, you may need to drill holes for some large eye-bolts like I did. If your loom has a horizontal side piece that is approximately the same altitude as the tensioned warp, you don't need to do this. My AVL's side pieces are well below that level, so I did. 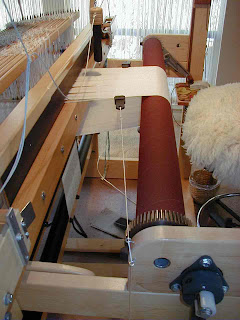 And here's a close-up of the clamp. 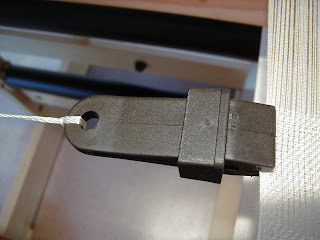 I don't use the temple on every warp. However, when I do need one it's fast and easy to set up, and the parts were CHEAP! And takes almost no room to store when not in use.

The clamps can be found at sporting goods stores, where they're sold with the tent stuff. Ask for the clamps used to attach cords to tarpaulins. Some hardware stores carry them too. I think DH bought them online. Google is your friend.

Just don't let the salesman sell you alligator clips. They're a completely different species!
Posted by Sandra Rude at 7:45 PM

Excellent tip. But then, Bill is loaded with good ideas and information. I will have to try this.

Brilliant! Thanks so much! I hate using a temple for the same reason as you state and the added reason that it just gets in the way! what a wonderful solution.

Sandra I really appreciate this tip. I happen to have two temples that are now too wide for the type of work I enjoy and I just sigh every time I look at them.

Such wonderful gadgets for weavers seem to lurk in unusual and unpredictable places - so I'm glad you wrote where you found them. Simple elegance is the way to go for effective weavers tools.

I'm on my way to the salesman at the sport store to try and communicate what I want. Somehow I know he will ask 'what do I want it for' and I may just have to lie and say 'to attach cords to my tarpaulins'. Hope he doesn't ask 'what type of tarpaulin'. Thanks!

I agree and this seems to be very handy and useful. The pictures are good and I can understand how it works. Still I wonder if you can upload a picture where it is possible to see the rows of interlocking ridges running across the mouth of the clamp? Don't they make marks on the cloth?

Hello, I love reading through your blog, I wanted to leave a little comment to support you and wish you a good continuation. Wish you best of luck for all your best efforts.