I noticed today that a reader from France had visited my blog, and in tracking the link back, I was able to find the reader's discussion group, le forum du filage, located here. There was a discussion on that forum about my work, and whether the moire designs were planned or "haphazard" (at least, that's what I think they asked, but my French has not been used very much since high school so I can't be sure). It was speculated that I dyed the threads in a gradated colorway, and the design results from the color in the yarn, not the weave structure.

I hope I can explain the technique so someone in that forum can share the information among the group.

Half the warp thread is dyed one color, and half a different color. On the loom, each color is threaded in a different pattern. The two patterns alternate thread by thread: A1, B1, A2, B2, A3, B3, etc.

The weft is dyed a third color. All threads are solid colors, not a gradation. The design is the result of the two different warp patterns as they interact with the weft. It is carefully planned, not random or haphazard. The structure is a compound twill, because it consists of two networked twills, one superimposed on the other. The two twills form what DH the engineer calls an interference pattern, and I call moire.

Here's a screenshot of an example weave draft, shown as a closeup of the upper right corner of the draft. Click the draft to display a larger version, so you can see the colors of the warp threads and the color of the weft thread clearly. 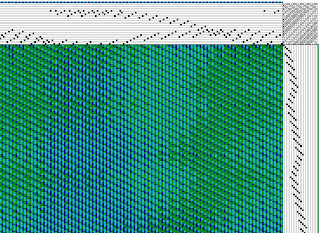 Now, if I tell my weaving software to show me the draft at about the same resolution as the cloth will be when woven, here is what it looks like. 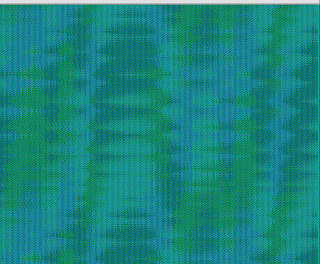 Many people see my weaving and think it was created with warp painting or variegated thread, or that it is just a computer-generated random pattern. Believe me, it is neither. Although it may look like many colors are present, the cloth is made with three solid colors. There may appear to be more than three, but that appearance is a result of a carefully planned weave structure that blends the colors in different proportions.

By the way, this draft is not just an example. I wove a three-yard length of this draft for the yardage exhibit at Convergence 2006 in Grand Rapids. The cloth is still waiting for me to find the perfect jacket or vest pattern for it... I had hoped to enter it in the fashion show at Convergence 2008, but I doubt if it will get done by the entry deadline. Maybe 2010?
Posted by Sandra Rude at 10:53 PM

I still find this fascinating. I have read through your article on it and will be trying it in the new year.

Sandra, thank you for the link. My French, too, is very weak from years of non-use, but I have bookmarked this blog/forum. Maybe if I have time (sure, that's funny.........) I will use a web translator for some of it.

Both your description of your weaving and the discovery of this French forum are very interesting to me. I have just signed up to the forum, and now am going to attempt make a translation for them. This may take a while - I was top in the translation French to English in first year at university, but that was over 20 years ago and I've neglected the language since. I've got a copy of Dorothy Burham's "A Textile Terminology" which has many terms in several languages, this will be a great help. I'll let you know how I get on with this.

I think that it is funny that anyone could think that your scarves are "random". Personally, I think that they are nothing short of awe inspiring!