More Adventures in the Dyepot

One of the visitors to our Open Studios event, a man who belongs to the same woodturning club as DH, came bearing gifts: a bag of osage wood chips. I promptly filled a jar with chips, added alcohol, and almost immediately the liquid began turning a lovely clear yellow. 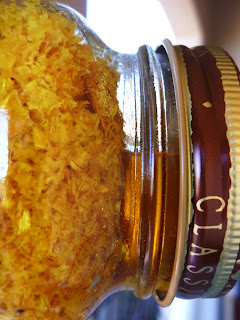 Today, I followed the advice of Neki and Deb, and altered the pH of the madder dyepot. First, while a new set of skeins of 60/2 silk were scouring and mordanting, I dumped all the ground madder bits that I'd saved from the previous batch, added water, and heated the whole pot to about 140(F). Then I let the pot cool, and poured the contents out through a strainer to remove all the solids. The solids went back into their jar, more alcohol was added, and the liquid is already turning a nice color: 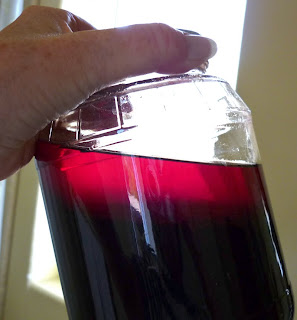 As soon as the timer on the mordant bath went off, I put one of the skeins into the dyebath. The color was orange, so I added some dissolved soda ash to raise the pH. Still orange. More SA. Still orange, but with more of a red cast to it. More SA. I'll leave the skein until tomorrow, and decide if it the pH still needs to come up more. 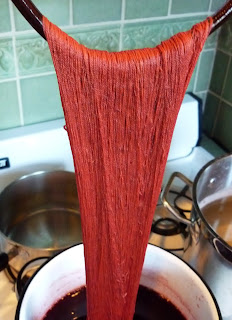 The second skein went into a dyebath made from the liquid out of a jar of "old man's beard" lichen that covers the oak trees in areas where the fog comes in and raises the humidity level. It's been soaking in alcohol since just after we moved here (2.5 years?) and the alcohol had drawn out every bit of the mossy green from the lichen - it's now pale beige. I had expected the alcohol to turn the lichen rubbery and limp, but it's still crisp, just ghostly looking. I'll try to get a photo of the lichen "skeletons" tomorrow. In the meantime, this is what the yarn looks like with the lichen dye and a pinch of copper sulfate to intensify the color. 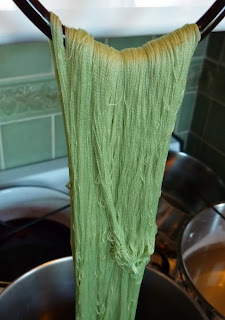 While all these things were happening in the dye kitchen, I finished sleying, tying on, and tensioning the Wood Series warp on the 24-shaft loom, and wove about 200 picks using the butterscotch gold skein dyed with Pink Ivory. 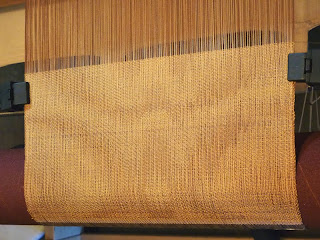 wow, such activity! i need to finish winding on.
what a nice gift you got,pretty golden yellow.
looking for a lime green. ideas of natural dyestuffs?