Like all lichens, usnea is a symbiotic composite consisting of a fungus and an algae. Because of the appearance of the material after it soaked in alcohol for over 2 years, I suspect that the alcohol dissolved the algae, along with its chlorophyll, leaving behind the structural material of the fungus. 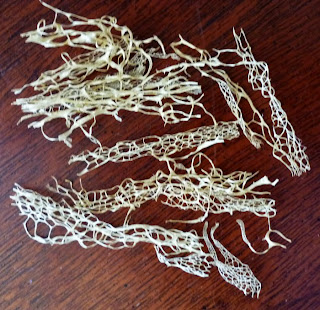 My belief is partly based on the similarity between the color I got from the lichen (see below), and the color obtained from the chlorophyll extract I got from Michele Wipplinger years ago.

And how's this for day-glo orange? 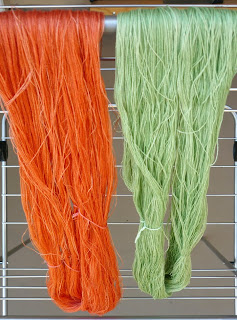 The soda ash definitely intensified the madder, although it didn't ever get to red. I put another skein in that same dyepot this morning, with a little more soda ash, but it's looking like it's going to be browner than the one in the photo above.

Silk generally prefers an acid environment, but as long as no heat is applied, it'll be okay in this alkaline bath.
Posted by Sandra Rude at 11:57 AM

Usnea also has antibiotic properties. Make a tincture of it and use on your skin.

wow!
ok it's not red, but it's not bad at all.with bright teal or navy and you get pretty iridescence.