The Wizard and the Orchids

I finished the Wizard Nebula weaving, shown here just before the top hem was added: 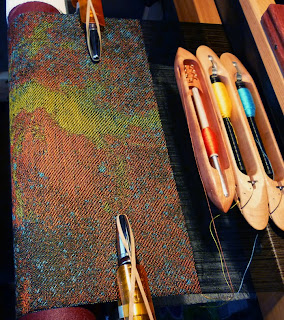 Still reserving judgment until after wet finishing. In the meantime, I've downloaded a few more NASA images - moons and planets - which may be more suitable as weavings. One of the new ones will become my sample on the loom during the next Open Studios weekend, coming up on October 23-24.

By the time I'd finished the Wizard, the woven warp had advanced far enough under the loom that I could get a shot of the orchids: 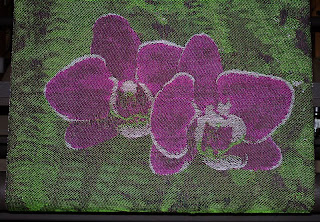 It's dark under there, but this shot at least shows nearly the whole weaving. I was afraid that the fern shapes would be indistinct, but there's no mistaking them!
Posted by Sandra Rude at 10:54 AM