Towels One and Two

This is what I accomplished today: Towel One is completed, and Towel Two is begun. 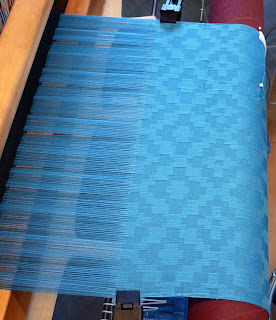 In the draft below, only one block is warp-faced in any given block. In the first treadling block, it's block A; in the second, block B; etc. 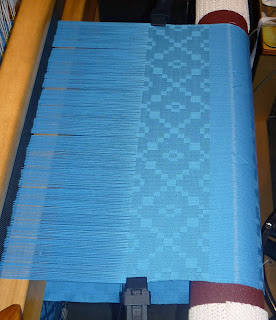 The draft is not strictly symmetrical, which makes it more lively to my eye; one of my several mantras is "symmetry is overrated." Which seems as if it would contradict another mantra, which is "if you can't be perfect, at least be consistent" but as long as you don't restrict consistency to perfect symmetry, you're okay.

Two unfortunate factors combined to make weaving slow today. First, the unmercerized warp yarn turns out to be a wee bit tender, and second, my shuttle has hit the tile floor too many times and developed a broken nose that loves to slam into warps and shatter them. By the end of the first towel, I had [A] mended 5 broken warps, and consequently [B] sanded and buffed the shuttle's nose back to proper smoothness.

Here's hoping the second and subsequent towels are less prone to breakage.
Posted by Sandra Rude at 6:22 PM

i totally concur,symmetry IS overrated.perhaps it works as a cop out for creative rut?

Hear! Hear! Asymmetry is much more interesting for the eye & the brain.