Last Fall, I took a photo of some maroon-and-green daisies growing in my in-law's garden, thinking it would make a good weaving. 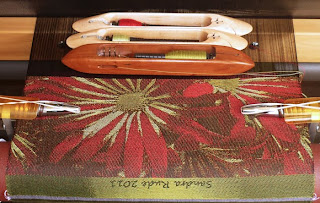 In the original image, the red was a dark red-violet. I didn't have exactly the right red in my stash, so I wound off a skein from that gigantic cone of tomato-red rayon, and overdyed it with blue to darken it a little. It didn't bend as far toward purple as the original hue, but it darkened and dulled that bright red just enough. The other two wefts are a light green and a medium yellow-green.

I have enough yardage left on this warp for two or maybe three more pieces, and then it'll be time to wind another warp. The big question is: what sort of warp? I've had a lot of fun with the black warp, and am almost feeling guilty for not trying some other techniques, such as dark/light end-on end for multi-weft double-weave, or warp tapestry (in which the colors are in the warp, and the wefts lighten or darken the warp colors on the face of the cloth). Almost guilty enough to contemplate trying something new, but probably not quite! I've still got some images queued up that were designed to be woven on black.
Posted by Sandra Rude at 10:02 AM

An intense hue can be tough to overdye but worth trying. I have some very fine yarns in several colors, silk and some cotton. Often I wind one of those together with another yarn. This nudges the two in a visual blend and I like the vibrancy it contributes.