I've spent a good bit of time yesterday and today holding a ladder while DH climbed up to repair some problems with the roof gutter and downspout on the second story of the house. Although holding a ladder for someone 30 feet in the air can be unnerving, especially when the ground around the ladder is mostly concrete, some of the consequences were quite comical.

The most common bird in this neighborhood is the Acorn Woodpecker, a handsome, very verbal, well-named bird. Here's the male: 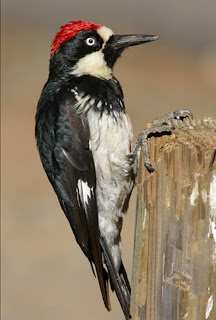 These guys live in colonies of 8 or more birds, with a complex social structure (all the mature females lay their eggs in a common nest, and all the juveniles and females help raise all the chicks). Their primary food is insects and fruit most of the year, but they store a huge number of acorns for the winter. Usually, the storage place is the tree that their nest is in. One of the oak trees next to the house qualifies as a food bank - each crevice in the bark has an acorn stuffed into it. And this variety of oak has deeply creased bark, so there are lots of storage places, without the bird having to do much work to make them - no drilling required.

According to the bird database at Cornell University, a tribe of these birds deposited 220 kg of acorns in holes they pecked in a wooden water tank in Arizona. Sometimes they store things in places they won't be able to retrieve the acorns from. I've found countless acorns "planted" in the orchid pots that spend the summer months on the second story balcony, some sprouting healthy little trees. DH found a lot of them tucked into a canvas tarp on a high shelf in the garage. The cheeky little devils fly into the garage, make a deposit, and then leave without even a thank you to the bank teller!

While he was working on the gutter and downspout, DH found a roof tile that hadn't been completely sealed, and underneath it were acorns. Lots of acorns. DH started chucking them over his shoulder, and the ground under the ladder was littered with at least 200 before he was finished. Two hundred acorns and one button. Why the button? Ask the woodpecker.

This is only a dozen of the carefully hidden acorns: 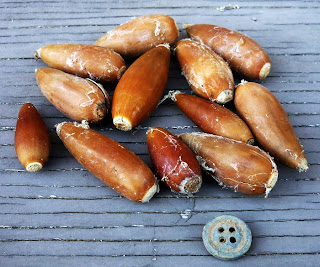 From the evidence of spiderwebs, some of the acorns have been in there for years - probably from the day over 5 years ago that the roofer finished the job and missed this one hole.

As DH worked, the air was alive with the chatter of woodpeckers plotting revenge. "He's stealing from our stash!"
Posted by Sandra Rude at 6:27 PM

Too funny. Of course the little fellows were mad! Now they have to start all over. Reminds me of a stash of acorns we found in an old suitcase in our attic. In this case, it was squirrels, not woodpeckers. Occasional reminders that we don't rule the planet.
PS - be careful on those ladders.

now if you could just train those woodpeckers to put the acorns in a jar of denatured alcohol for you!

Hi, Deb, Unfortunately, most of the acorns that hit the ground were hollow - eaten away by bugs over the years. So I don't think there would be much color to get out of 'em. Plus, I kind of hate to make the birds give up their acorns - they do work hard for them! And I have lots of other sources of brown and tan, from DH's woodworking.
-- Sandra

you need some black iberian pigs to wolf down the acorns.and then you need someone who'll process them into pata negra hams.(^_^)