Today, I rinsed the ikat-tied skeins and untied the tape. After partial drying, I got a good idea of how the finished color range turned out. It would be perfect if it were for me - I love those coppery, russet hues! But This is Not What the Customer Ordered. She wants brown, and brown she will get!

The skeins were dyed in Procyon MX fiber reactive dye. I always make brown by mixing orange and navy. Works every time, except this one. This time, the orange struck first, and the navy never had a chance to compete. I've no idea what happened - temperature right for orange, wrong for navy? Dunno. 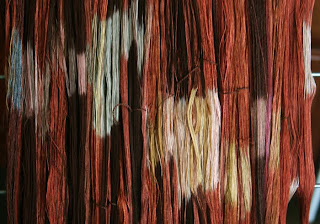 So back into a dyepot the skeins went, this time a royal blue bath. The copper and russet are turning dark nut-brown, finally. I wasn't about to re-tie the ikat sections - my hands are still complaining about doing it once, so twice was out of the question. That means the ikat sections are now blue, green, olive, and purple (depending on the interaction of the blue with the original hues).

I'll post another picture tomorrow, when the final(!!!) rinse is done and the skeins have a chance to dry at least part-way. If anyone were to tell me that these poor threads have a single, solitary dye site left on which a helpless dye molecule could get a grip, I'd be mightily surprised! At least this time I'm pretty sure of the outcome. Like I say, sometimes my mileage varies from my expectations. That doesn't mean I'm unhappy or disappointed, just that it's going to take an extra step or two to get where I expected to be - making an end product I'm sure the customer will like.

On a more successful note, I've been notified that my entry in the Textiles in a Tube exhibit was accepted, so it'll soon be on its way to South Carolina. The piece I entered was Sunflower, pictured on the loom here and in the post before that. Now to decide what to enter in HGA's Small Expressions...

P.S. I forgot to mention that I've posted a couple of DH's spectacular rolling pins on the sales blog (see link, right-hand column). Mother's Day will be here before you know it, and these are really popular. Some cooks prefer the American type, with rotating handles, and others prefer the traditional French type, which is all one piece, so DH makes both styles.
Posted by Sandra Rude at 5:35 PM