Back in early January, Cally Booker posted some photos she had taken while on a walk on the banks of the river Tay in (or near) Dundee. Which, given that she was recovering from a sprained ankle and still using a cane, was very brave, with those weather conditions! I asked for (and received) permission to use one of the images in a weaving.

After some cropping and other manipulation (mostly to bring out the pale gold hues) I came up with this version, indexed to 9 hues - 2 pale golds, 6 greys, and black, and reduced to 900 pixels tall. Click the image to display a larger image. 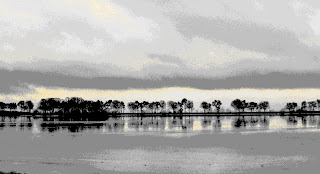 Then I rotated the image 90 degrees clockwise, added 60 pixels-worth of plain border (aka top hem) along the right selvedge so that it's the same width in pixels as I have hooks on the loom, applied weaves for each hue in the indexed image, and began weaving: 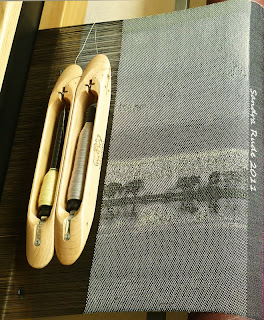 The woven version of the image is darker and more brooding than Cally's original, because I chose to use a silver-grey yarn instead of a white one to get the grey tones. In real life, the butter yellow shows up more than it does in this photo.

Because the image is oriented so that the warp will run side to side when the piece is hung, what would ordinarily be the bottom and top hems are now going to be folded back on each side, and the left selvedge becomes the bottom of the piece.
Posted by Sandra Rude at 6:26 PM

Oh wow, you've made it look really cool! Though I should mention that it isn't actually the Tay, it's a reservoir at this country park. Funnily enough we were at its next door neighbour park yesterday, which is more wooded.

You continue to amaze me!