The warp looks quite tidy at the front of the loom, doesn't it? 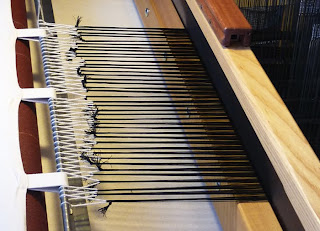 At least, it looks tidy compared to the view at the back: 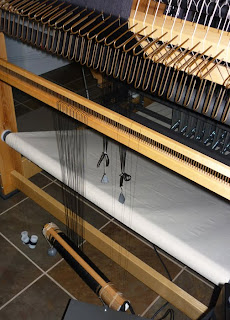 The film canisters are my separately weighted selvedge threads (an abbreviated basketweave selvedge). They're always there, dangling off the back of the loom.

The two bundles hanging with weights on them are the weak threads I swapped out during the tying on process.

The mailing tube (weighted with a one-pound fishing weight at each end) holds the 60 replacement threads.

After finishing the knotting, pulling the warp forward through the heddles, and cutting off at the knots, I lashed the warp on in groups of 24 threads. Then, after saying a small prayer to the weaving goddess, I applied tension to the warp. Nothing snapped. Whew! I'm going to let it rest, under tension, until tomorrow, and then there's nothing to do except just weave. I hope!
Posted by Sandra Rude at 6:31 PM

It looks very neat to me! I love the temporary warp beam - three cheers for cardboard tubes :-)

have you considered giving a cardboard tube and rigging workshop? i'll take it :)