A Big Sigh of Relief

I had some misgivings when I sat down at the loom, but fortunately they were unfounded. My makeshift auxiliary beam worked just fine, and the weak threads behaved themselves and stayed out of the way. (I had been afraid they'd have trouble separating from the main warp, or would tangle with the replacement threads.)

The piece I was in such a hurry to weave is this image of an oak tree silhouetted against the sunrise: 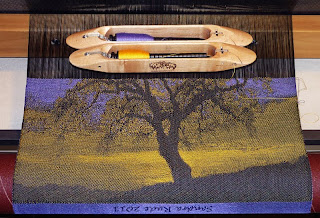 I first wove this image back in May, 2010, and blogged about it here, with the original image. It hung around a long time in inventory, was exhibited at a number of craft shows, and finally traveled to the Blue Ridge Fiber Show last Fall where it sold -hooray!

When I filled out the application and submitted images of work for the annual textile show at the Olive Hyde Art Gallery, I forgot that one had been sold and included it in my submission. Bad, bad Sandra! So I figured that since the first version of the piece sold in the Eastern states, and thus is unlikely to reappear here on the West Coast, it would be okay to weave another for the exhibit at the Olive Hyde. The appointed date for delivering accepted work is this coming Sunday, so the deadline is looming (to coin a phrase).

After finishing the piece, and its top hem, followed by a few shots of waste yarn, I wove in a dowel and more shots of waste yarn. After a generous application of Fray Block, it'll all sit overnight, and tomorrow I'll cut it off, do the wet finishing, pressing, and hemming, and make a hanging rod for it. 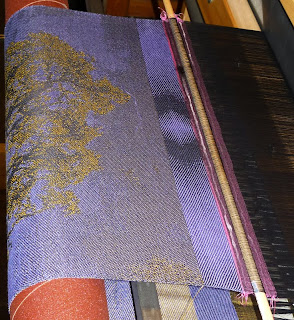 When I'm ready to start weaving again, the dowel will get tied on to the front apron rod and away I'll go. The dowel technique, by the way, is something I learned from Alice Schlein. Thank you, Alice! It's much faster by far than lashing onto the apron in bouts.
Posted by Sandra Rude at 6:35 PM