Here are a couple more pieces in the series I presented at the Designing Weavers meeting last night as my interpretation of the annual project theme of "Seeing Red."

You might have seen glimpses of this lily when it was on the loom back in January. It was woven with wefts of pink (that infamous huge cone of bubblegum pink), fuchsia, and chartreuse. 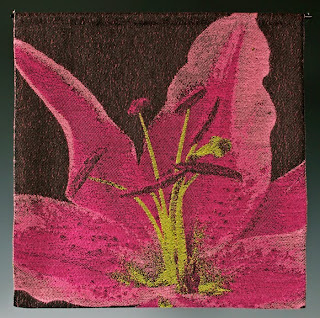 This is its formal portrait, all in one piece - unlike the loom view, which is always a partial view (or a series of partial views).

The same applies to the peonies[?] in this one: 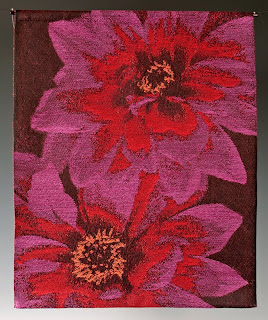 In this case, the wefts are scarlet, fuchsia, and gold.

Five other members also presented their annual projects, and it was a fascinating mix of media - a weaver using several different natural dyes that produce red colors (cochineal, madder, eucalyptus, etc.), a tapestry artist who also used natural-dyed wool in his series, a tapestry artist who incorporated text as a design element in her piece, two basket makers - one working in pine-needle forms and the other in wonderful and imaginatively combined found materials -and my flowers.

One fiber artist interpreted the theme in a unique way. He wanted to know how large an area of red cloth would have to be in order for it to be visible from a satellite crossing the sky at a predetermined time and place. We were shown the test piece of red cloth, and eagerly await the results of the test: did the satellite see red, or not?
Posted by Sandra Rude at 6:46 PM

what a fun guild only in ca!